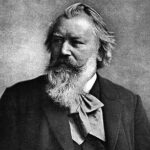 1 – Johannes Brahms, Symphony #4 in E Minor. A teacher I trusted once said to me, “I can’t trust anyone who doesn’t like Brahms.” Brahms represents a base line of cynicism. Go beyond the base line, into the world of idealism, and you encounter the gritty optimism of Beethoven, or the stalwart carry-forth stick-to-it-ness of Haydn, and you may end up feeling ridiculous. With Brahms, a healthy pessimism is your friend and compass. You can trust the E Minor Symphony to guide you through the darkness. 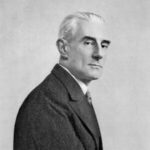 2 – Maurice Ravel, Piano Concerto in G. All his life, Ravel remained a curious artist, that is, an artist who remained curious, even after achieving great success. Following his visits to the Apollo Theater in NYC, and other venues where jazz reigned, Ravel found himself with renewed vigor, his acute curiosity restored by these new sounds in the new world, and created his G Major Concerto over a two year span. This great work is a musical synthesis that reflects the cultural swirl of the time, 1931. Black & white, jazz & classical are effortlessly integrated, like, it must be said, the keys of a piano. The slow middle movement is resplendent and transcendent. 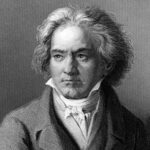 3 – Ludwig van Beethoven, 16 String Quartets and Grosse Fuge. I count these seventeen works as one, for they trace a life’s journey. You can follow along in the dozen hours it takes to hear the entire cycle, beginning with the Op.18 Quartets, which look backward and forward simultaneously, as 30-somethings often do. The middle Quartets (Ops.59, 74, 95) illustrate maturity at its prime, still young enough to fight, yet old enough to know how to resolve matters peacefully. Much is resolved in the Beethoven middle Quartets. Make what you will of the late Quartets (Ops.127, 130, 131, 132, 135, and the Fugue from Hell Op.133), one thing is certain, each of us makes of them differently. 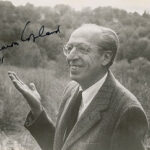 4 – Aaron Copland, Appalachian Spring. With the humility of a Shaker, this pastoral suite speaks profoundly with simple language. Family. Home. Love. The common equation of Life & Death. Where Barber’s Adagio is our National Music of Mourning, Copland’s Appalachian Spring is our National Music of Living. Its very name (which never occurred to Copland while he was writing this long-breathed masterpiece for Martha Graham’s dance troupe) is a sibilant exaltation of hard-won and grateful satisfaction, not satisfaction at clever accumulation, not Gershwin, but a deep-seeded satisfaction, similar to a farmer’s, at sowing and reaping a life of decency and quiet pride. America has honored Appalachian Spring since her first hearing, and awarded Copland our Great National Prize, Pulitzer, in the war year of 1944. 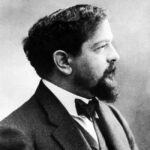 5 – Claude Debussy, Pelléas and Mélisande. A five-act cautionary tale about why it is not a good idea to fall in love with your half-brother’s wife. We all know what kind of man is Golaud, obsessive, jealous, a hunter. Why would the lovers persist to love when there was so much to lose? It is an eternal question, and not one answered satisfactorily in Maeterlinck’s play, but the answer washes over us in Debussy’s diaphanous, unearthly music, so unbearably beautiful we cannot turn away, even as we know we could wind up like Pelléas, killed by the brute, dying in rapture of a stupefying beauty. Such beauty, however rare, is among the most compelling forces known to humankind. Debussy, whose own life was a terrifying funhouse mirror reflection of his opera, puts the mirror to that beauty in Pelléas and Mélisande. 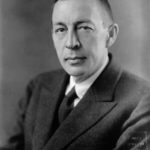 6 – Sergei Rachmaninoff, Rhapsody on a Theme of Paganini. If it a less complicated love you long for, there are these 24 variations on a theme by a man called “the devil,” plus the Dies Irae. Sounds like a charming mix, but somehow Rachmaninoff reaches out his long fingers and pulls it all together with pathos aplenty (including but not limited to the 18th variation) into a rich emotional experience, like a good cry. Somewhere in time, this sort of thing was often found in the movies, but the movies have moved on from Rachmaninoff. He belongs to lovers again, they who leap from day-to-day, each day varied from the next, never knowing what will be next, except that its theme will be love. 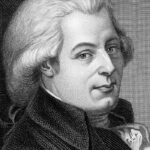 7 – Wolfgang Mozart, String Quintet #3 in C, K.515. Mozart wrote music, foremost, for money. Rarely did a non-mercantile motive compel him to write his best, and even then he rarely finished anything he started which did not have a check waiting for him at the end. But his six String Quintets were not commissioned and they are among his best. Scholars have unearthed no reason for him to have written them. And with strings unattached, Mozart let fire his imagination. The opening Allegro of the C Major Quintet is the longest sonata movement in history prior to Beethoven. The Quintets were not performed publicly. Mozart often held Sunday musical soirees in his Vienna apartment, with friends, colleagues and the curious invited to take part. The engaging host provided the music and the punch, and by sunset the musicians playing these String Quintets, including Wolfy on viola, must have been sublimely stimulated, and a little drunk. 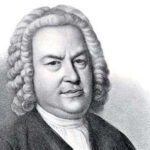 8 – Johann Sebastian Bach, Six Cello Suites. No drunkenness here. Bach’s Cello Suites represent steadfast concentration. They were part of Casals’ morning ablutions. For more than 150 years they were relegated to the dusty ranks of study pieces. Well, they are study pieces, and the study is Socratic, for Bach doesn’t ask the cellist to go fast or slow or in-between. The player has free will. The cello’s natural upper-frequency overtones are heard like never before, and a single voice rings high and low, reaching emotional heights and depths. The skill required to play these Suites is facile, complex and wide-ranging. They call for us to take close, narrowed attention to detail, as Bach makes a calculated study of human consciousness. It is not supernatural music. Bach said anyone could play it if you put your mind to it. Likewise anyone can hear these Cello Suites, and without doing anything extraordinary experience the shock of ecstasy. 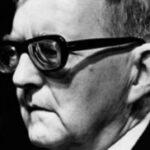 9 – Dmitri Shostakovich, String Quartet #15 in E-flat Minor. Some of the saddest music ever written. A morose meditation. A reflection on ruin. Composed when Shostakovich was sixty-seven, the E-flat Minor Quartet was his final string quartet. He would die the following year. But listening to this work, rather, sinking into the abyss of #15, I wonder how Shostakovich could have written another string quartet. What more can be said of death? He told the Beethoven String Quartet to play the first movement “so that flies drop dead in mid-air, and the audience starts leaving the hall from sheer boredom.” The audience will be bored only if they can’t handle the truth. Abandon all hope, ye who enter life. Grief and despair await you, Shostakovich reminds us. It truly is as awful as it appears, but if we can make Art out of that, and we have made Art out of that, then we can survive anything. 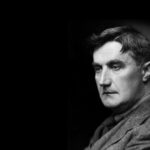 10 – Ralph Vaughan Williams, Fantasia on a Theme by Thomas Tallis. Believe it or not, even non-believers sometimes yearn for the soaring spirit that comes of religiosity. Vaughan Williams, like many an agnostic before and since, sought the soaring spirit in the gaping distant past. Here, the past is the Renaissance when the Roman Catholic Thomas Tallis served his majesties Hank the 8th “Defender of the Faith” & his son Eddy the 6th, as well as her majesties Bloody Mary & Liz I, as organist and composer, without losing his head. Vaughan Williams also sought the soaring spirit in the sound of expansive strings rising into the fan-vaulting of Gloucester Cathedral, where he premiered his uplifting Fantasy in 1910. Get to know the Tallis Fantasia. Let its spirit carry you – to the distant past, to the hopeful future, to your higher self.