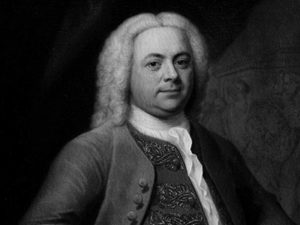 Popular legend has it, Handel (though known for his choleric temperament, clear-eyed pragmatism, and dogged independence) wrote Water Music as an obsequious gesture of reconciliation, and offered it to his employer, the Elector of Hanover. Handel was away in London on a prolonged absence (too prolonged for the Elector) when suddenly by the twist of royal marriage the Elector became King George I of England. Presto. Legend says Handel figured he’d better do something fast to get back in good with the chief, and Water Music followed.

Forget it. Handel was savvy. He knew when to perform his groveling apologies, but by the time this festive suite of dances, airs, fanfares, and pomp was composed Handel had long since made his amends to George I in a service at the St. James Chapel Royal during which Handel’s Te Deum was sung in His Majesty’s honor. Water Music came about after Handel had been engaged as music master to the royal family, at double his previous salary. The rift had been mended. The king’s good graces had been restored for Handel to enjoy.

The occasion for this piece d’occasion was a trendy aquatic fete the evening of July 17 on the “silver Thames” (Spenser). The reason for this regatta was, at least in part, George I wanted to smooth some ruffled British feathers. The prickly Brits were outraged that the King of England had yet to learn to speak English, and the language used around the royal palace was German. George I ordered an elaborate all-day event be staged on the river, where all the people of London could see it, and maybe forget about their king’s linguistic failings.

A contemporary account says that at 8:00 the king’s party “took water at Whitehall in a large open barge . . . Many other barges with Persons of Quality attended, and so great was the Number of boats, that the whole river in a manner was covered.”

Alongside the king, like an attendant lord, was a barge carrying Handel and fifty instrumentalists, serenading one and all – the king, the guests, the crowds on the banks. The music was tuneful, rhythmic, unambiguous. The overture was in the manner of Versailles. There were hornpipes flavored by English folk songs, and tunes from the Auvergne region, and minuets and bourrées that recalled many of Handel’s own famous works. He even introduced hunting horns into the English orchestra that summer night on the river.

Water Music was an instant hit. The king commanded that it be played again, then once more on the way back up the river. Three hours of witty, charming symphonies and dances. Each musician received the princely wage of three pounds and a serving from the royal feast.