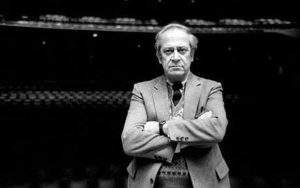 It was the summer of 1984. The Olympics were in L.A., and so was the Olympic Arts Festival, the artistic equivalent to the Games. I was flown in from Pittsburgh to produce the worldwide nightly half-hour radio coverage of the Festival, a staggering collection of artists in a wide range of performing arts and visual arts genres. For our seventh broadcast, I hosted the program from the Hollywood Bowl, which included an interview backstage with the executive director of the Los Angeles Philharmonic Orchestra, Ernest Fleischmann. You can hear me almost hyperventilate at the start of the interview, for I was more nervous about talking with the impresario live on-air than for any interview except one, Carlo Maria Giulini, newly named as L.A. Philharmonic maestro, in a Los Angeles hotel room right out of Versailles, in which sat Ernest Fleischmann, watching. In the self-enclosed world of elites that is classical music, I have never met anyone who surpasses Fleischmann for undiluted arrogance. Fleischmann put on a smiling face for the camera, but the times I saw him away from the public’s eyes were scary. He typically traveled surrounded by a coterie of disdainful young men and appeared to relish the immense power he possessed in his small pond.

It so happened, at the time of the Olympic Arts Festival, Fleischmann had recently wooed André Previn back to Los Angeles to become maestro for the Philharmonic, following Previn’s falling out with Pittsburgh Symphony management. Preparing for the Hollywood Bowl broadcast, I obtained an interview with Previn conducted by my friend Jim Cunningham, the mainstay at WQED in Pittsburgh. While introducing the interview, I was stopped by Fleischmann who said the interview could not have happened when it did. The rest is, if not history, a cringe-worthy memory. Other segments of the program by Olympic Arts Watch reporters have been cut or substantially truncated. The program begins with an impressive linguistic display by L.A. radio icon Gail Eichenthal.

(I make no apology for the condition of this 36-yo cassette tape. That it exists at all is a miracle.)