Editor’s Note. DJB’s Mad Mike interview appeared on the pages of In Pittsburgh, for which Bartel was editor-in-chief, December 2, 1985. Mad Mike was known in some quarters of Pittsburgh as a man about town. It’s as good an example as any of Bartel’s practice of interviewing anyone, anywhere. It took place at his third-floor garret/maid’s quarters in a former belle époque mansion walking distance from the Highland Park reservoir. 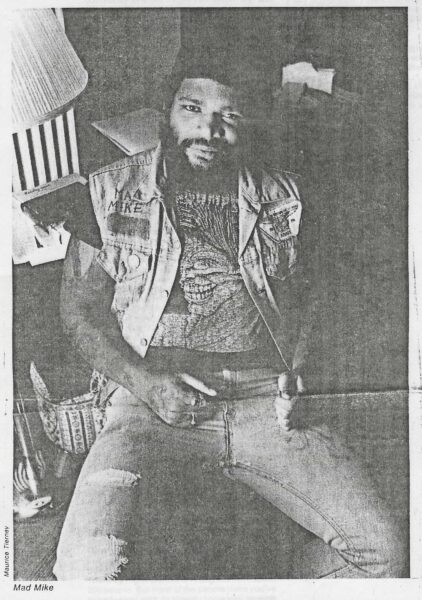 Bartel: Are you aware that you look intimidating?
Mad Mike: It took a while. I’ve looked this way since I was 15 years old. People who are supposed to be liberal and understanding, those are the people who are so uptight when I run into them. These are people I know. Like in bars I hang out in. I come in with three or four other people who look like me, and they just ignore you. Or you walk to one end of the room, and they walk to the other, back and forth, all night. I’ve managed to build up a wall and not pay any attention to it. I already cut everyone off who does that, and people who don’t I really admire.

Part of the reason is the reaction it gets. I kind of like it. I usually tell people who give me a hard time that they’ve watched too much damn television. I go into a grocery store and get followed by a security guard. You never get used to it. If you don’t judge people by the way they look, and they do you, you can never get used to it.

Do you think Pittsburgh is racist?

No. I get more flack from black people than white people. I’ve never been out with a black girl. Inner city black people say I’m trying to act white. I’ll be sitting around having a conversation, and some black girl will come up and say, “Shit, des m’fucka’s out to be sum hunky.” It’s the way I talk. My parents are educated, so I don’t say, “Dey be doin’ dis,” and m’fucka. Every third word is m’fucka. You see, when you’re black you have to be well-dressed, advance yourself, go to college, or just be well-dressed and be a bum, so long as you’re well-dressed. People still say to me on the street, “There’s that nixxer that wants to be white.” I can’t even hang out with my relatives. My aunt, who’s 60, always refers to me as that boy who wants to be white. I never wanted to be anything, other than left alone. It sounds real stupid – like I’m the stupid country nixxer – but if I have gas in my bike, a six pack of beer, and somebody to talk to, I don’t really care for much else. I collect toys. I watch Bugs Bunny every day, at least an hour and a half of Bugs Bunny. I like the idea of not having to grow up like society says. I’d like to just go to a playground and play all day all the time until I’m 60. When I see people I went to school with they don’t understand at all. They ask, “What’d you do with yourself?” I say, “Well, I bought a motorcycle and a case of beer.”

Are you in a gang now?

I was in a club for about six months. It was called the Pittsburgh Gentlemen. But they didn’t only dictate to you what you were supposed to ride, but what the bike was supposed to look like, and how fast you were supposed to ride. If everybody was riding 80 miles an hour on a residential street you had to do it. I usually got in arguments with people because I didn’t want to drive that fast. I like to cruise up Murray Avenue and look at school girls. And if you went to a party and somebody picked up on someone else’s girl friend from another club, guess what, everybody got in the fight. That’s no good.

Have you been in a lot of fights?

Well, people usually don’t push me. In fact, I’ve never been called up for a fight in my life. Somebody in a bar might bad-mouth me, and I’ll say, “You want to fight?” And they’ll say, “No.” I can’t remember the last time I was in a knock-down drag-out fight. It’s been two or three years. Last May, these kids were around causing trouble for all these punks, so I decided I should beat the fuck out of them. I came up to them, and punched one kid once. They’re not much around anymore.

What about drugs? Do you take them?

Never. I haven’t smoked a joint in about two years. I never did hard drugs. Not even coke because I could never afford it.

Why don’t you take drugs now?

I think it’s a cross between I can’t afford them, and I’ve never found anything that I like the way it makes me feel. I’m fine the way I am. I can get crazy as I want just sitting here talking to people. I like control. I like to know where I’m at. I feel better now. My head’s clear. I used to do crystal THC and I’d get sea legs, my legs felt like they were on ship, they’d wobble. I’ve seen a lot of people get their lives wrecked by that shit. Everything they say and do is centered around their drug.

Do most of your friends still take drugs?

Most of my friends can’t afford drugs. If they have money they pay the bills with it, or buy comic books, or records.

What do you read?

I like to read war novels. And I’m just finishing The Right Stuff by Tom Wolfe. I like that a whole lot. I also read some music magazines like Spin and Rolling Stone. I read a lot of underground comics. I love underground. Ask me what kind of music I like.

My radio stays on WQED-FM. It’s not insulting to your intelligence. I knew a girl once who said, “I can’t listen to this. It doesn’t have a drum beat.” Well, you’re missing the boat, sister. I listen to Mozart and Beethoven a lot. I like big, all-consuming symphonies – big sound that surrounds you and picks you up. Is there a dress code at Heinz Hall? I’ve always wanted to go. I’ve wondered about that. That’s why I never went.

Do you see a lot of women?

I’d say I get laid about once a week, but it’s usually with a different person every week. That annoys me. They’re usually not the kind of people you can call up and go have a pizza with. But there isn’t much else happening. I don’t want a permanent girl friend. I had one once. It was marriage, and stay in the house, and watch television, and eat popcorn.

How do you meet women?

I usually just go up to someone on the street. Someone might admire a tattoo, or anything. There’s a big social circle I hang out with, about 200 people. But most of the people there you’ve already slept with, or already know well enough to know you wouldn’t want to go out with them. So I usually try to call somebody that I don’t know. Girls under the age of 20 are too stupid to know the difference. They don’t expect much, and they’ll believe damn near anything. I told these girls I was on a TV show called 3-D Bikers From Hell and they believed me and right away they wanted me. But girls who are like 25 want someone who has a job and security and a Volvo and a condo.

You don’t like those kinds of people very much.

I really really really hate them. The whole preppie thing. It’s so right wing it makes me ill. I insult those people. I spit on them.

C’mon, have you really ever spit on someone?

Oh, yeah, all the time. On girls named Muffy and Buffy with their bob-top hair. I only come in contact with these people directly when they come into clubs and try to be ultra-hip. Then I really abuse them. To them we’re liked tamed nixxers. The can stay in the club and we won’t steal their wallets, or beat the fuck out of them. On the street they won’t speak to you, but if they see you in a club they’ll come to you and say, “Hi, how ya doin’?” Kids know me by sight everywhere, and they’re always saying they’ve hung out with me. Jesus, I don’t even know who these people are.

What do you think of Jesus?

I don’t. I don’t believe in any of that stuff.

Was your family religious while you were young?

Oh yeah, it was forced on me. We had to go. It was a loud church. People screaming. Shouting, “God” in the third row. Crying and jumping around.

When did you stop going?

I think it was when I was about 15 that I realized I didn’t want to go. We used to get in arguments, me and my mom. I don’t believe in any of that stuff. I think that when I die I’ll fall on the ground and be worm meat. Period.

You don’t think that in 20 years you’ll go back to it?

You know that some people are going to ask me, “Why are you wasting space interviewing this guy? He has nothing to say.”

They would be partially right. I have nothing to say. I think that kind of condescension is one of the few things that makes me violent.

Editor’s Note. A few days after the Mad Mike Interview hit the stands and blanketed the Pittsburgh metro market, Dennis and Mad Mike went with a small group of friends, including Mad Mike’s charismatic older sister, Minette who wore proper bunch attire except for the twenty piston rings on both wrists, to a posh Sunday Brunch downtown at one of the city’s finest hotels. Mad Mike dressed as you see him in the b-&-w photo. Dennis wore his teaching coat, tweed and forest green. “The bunch went down,” says DJ, “without incident.”

Today, Mad Mike, aka Mike Seate, is an acclaimed motorcycle journalist, and author of a dozen books on motorcycles, including Technochop (MotorBooks International), and Choppers Forever: A Complete History (Motorcycle Riders Club of America). Mike founded Cafe Racer magazine in 2008, devoted to motorcycles built in England after World War II.

To read some of Mad Mike’s journalism, please click the link.
https://caferacertv.com/tag/mike-seate/