DJB is widely known as one of America’s preeminent classical music radio hosts. He first went on-air when only 19 at the student-run KUSC of the University of Southern California. In 1975, the station hired a professional staff to actively compete in the L.A. radio market, and Dennis was named KUSC’s Morning Drive DJ (producer/announcer). In 1980, DJB left Los Angeles for Pittsburgh to pursue a life of writing. He taught writing at Pitt, however, within a year, Dennis was asked to join the local classical music station and Steeler City stalwart, WQED (“Where Radio is a Fine Art”).

In 1984, Bartel was recalled to KUSC to produce worldwide radio coverage of the Olympic Arts Festival. Following his summer in L.A., Dennis returned to Pittsburgh, where he was named editor of the local city paper, In Pittsburgh. In 1986, he became part of the charter staff at Baltimore’s fabled WJHU as program director and on-air talent. The following astonishing four-year odyssey resulted in tremendous success both for WJHU and DJB. However, Dennis was still seeking his literary life, and so left the Johns Hopkins University-owned station and began writing for a variety of publications, as a national music columnist, a regional columnist, and a free-lancer, but the call of radio was too strong for him to resist, and when offered a place on-air at the eminent WGMS in D.C. (“Washington’s Good Music Station”), he accepted.

As James Bartel, he served ten-years as Evening Host, and another four years as Morning Drive Host. During this time, he established himself as a leading radio innovator. When the 60-year-old WGMS, the first FM station in D.C. (1946), was sold down the river and transformed into an adult contemporary music station, DJB was offered the opportunity to come home to L.A. and take up the job he once held, Morning Drive DJ at KUSC.

James Bartel comments on the following aircheck. “For what it’s worth, these two airchecks, from Monday midday, 2-9-98 and Monday evening, 3-23-98, may serve as prime examples of my radio prime, or anyway it’s the way I sounded from about 1996-2002, before moving to Morning Drive. Every voice track, 10 am – 3 pm and 8:00 pm – midnight, can be heard, untouched. What’s more, the material presented on-air was all generated during the program. I had only the opening announcement prepared ahead of time. I’m running the board, so the sfx are all mixed live. Some of these items were regular features in the evening (Great Composer Quiz, Haydn’s musical clock), while others were one-time ideas, in form and content. I willingly worked inside the restraints on length and content imposed by “commercial radio professionals” and still managed to willfully produce a program which, as I listen to it nearly a quarter-century later, I know I must have been pleased with as I reviewed it that spring night on the car stereo during the drive home to my wife and 19-day-old daughter. Becoming a parent can do wonders for your on-air presence.”

James Bartel comments on the following four tracks. “There’s a distinct difference between the 1994 tracks and 1999’s. In the latter, I’m working with greater ease and complexity, in terms of content, delivery, and production. In ’94, I had been on the job only a few months. Five years of practice helped me get it all into my blood stream. I had also won a bunch of awards, and each night I addressed a large audience. I was feeling confident.” 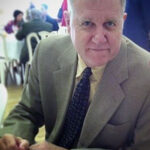 DJB recalls: “In early June 2007, I returned to KUSC after twenty-seven years in the east, where I churned out a radio career with long stints at WQED Pittsburgh, WJHU Baltimore, and WGMS Washington, D.C. I had left L.A. at age 27 and now I was back at 54 to much fanfare, or anyway, a lot of fanfare for a Classical disc jockey. My return was conceived and facilitated by a Los Angeles radio legend, my long time friend Gail Eichenthal, who had become KUSC’s Program Director. Two days before I took hold of the L.A. mike, Gail invited me to appear on her Saturday morning broadcast “Arts Alive” and I thus spoke my first words in my new (and former) job. Here’s how it went.”

James Bartel comments on the following voice tracks. “On these tracks, selected at random from selected programs somewhere starting around 2009, two years into my second time around as KUSC’s Morning DJ, I sound calmer and older but I still like showing off my chops. Siri Singh What? Opponents within the station were already winning their one-sided fight with me (one-sided in that I did not fight back), so some of the edge found in broadcasts from my first few years back at KUSC sound blunted here.”