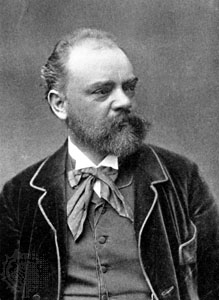 The “Dumky” Trio was written in early 1891 after Dvořák had returned from his stay in America to his rural home outside Prague. It possesses a folk manner, with open emotions making wide pendulum swings and a dress-down exuberance. Dumka (plural dumky) is a Russian literary term for a type of elegiac ballad whose nature is generally melancholy brooding or meditative, except for those moments when the dumka swings abruptly around and sings with vigor. Dumky were popular in Ukraine and Bohemia at the time.

Dvořák composed six stylized dumky, in different keys, for his E Minor Trio. The first three are played without pause and form the first movement. Of special note is the fine solo cadenza for cello in the second dumka, a gentle cantilena. Dvořák wrote the cello part in this Trio with his friend Hanus Wilhan in mind. Wilhan would tour with Dvořák and a violinist playing the “Dumky” Trio that spring.

The rest of the work completes the classical sonata form. The stately fourth dumka, marked andante moderato, is at the heart of the second movement. The third movement is made of a scherzo-esque dumka with a steady beat. The rondo finale alternates sad and sunny, and at times sets the piano raucously free to overwhelm the others. Dvořák played the piano at the work’s premiere, at the University of Prague, April 1891, when he was awarded an honorary degree of Doctor of Philosophy.