No less a critic than Beethoven said Op.131 was the greatest of the “late” quartets. Having finished the three quartets commissioned by Prince Galitzin, Beethoven remained overwhelmed by ideas for quartet writing; his sketchbooks were gorged with material he’d been unable to include in Opp.127, 132, and 130. Without a commission, Beethoven began work on another quartet, say scholars, “by inner compulsion.” 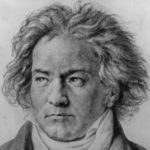 This may help explain the epigraph Beethoven wrote on the manuscript of the C-Sharp Minor Quartet: “Purloined and put together from various theses and thoses.” Close study shows Beethoven’s ironic remark also refers to his attempt to mesh violently conflicting elements in a cyclic form, not so much to achieve a homogeneous effect, but to resolve profound contemplations on mysticism and spirituality. “Is not the overwhelming impression,” asked Beethoven scholar Barry Cooper, “one of heightened awareness and vitality, of having vicariously faced and conquered the tragedy that is at the heart of every human existence?”

From the opening fugue, which Wagner called “surely the saddest utterance ever expressed in notes,” we are faced with a terrible melancholy, a sense of abandonment. The theme is introduced by the unaccompanied first violin, then the other three instruments follow at regular intervals, as in a funeral march. The movement is condensed nearly to shorthand, yet each idea leads to the next with fully articulated logic. The entire quartet is played “attacca,” without pause – one of many signs illustrating that Beethoven, with Op.131, had made a tremendous leap away from all traditional forms of quartet writing. Beethoven explained, “Art demands of us that we should not stand still.” The elusive Allegro which follows renders the despair of the first movement “a soft memory,” said Wagner. It is surely more buoyant, almost a dancing scherzo. In fact, deep within the bucolic shade of this second movement can be heard strains from a rustic dance reminiscent of Beethoven’s long-deceased teacher, Haydn. The third movement is an eleven-bar transition, during which the instruments make a few comments to one another before getting back to the serious business at hand. The Andante, universally regarded as the heart of the C-Sharp Minor, is a set of seven variations on a tender theme, introduced by the violins in dialogue, and gradually transfigured into unrecognizable shapes. Beethoven made many of his most sublime statements in the variation form, “the form,” said the writer Milan Kundera, “of maximum concentration . . . What Beethoven discovered in his variations was another space and another direction. In that sense they are a challenge to undertake the journey, another invitation au voyage.” Here, the voyage is into Beethoven’s astonishing inner life. The fourth movement is quite simply a transcendent mediation. It has provoked innumerable ardent declarations from the composer’s greatest champions. Wagner: “From this comes a psychological and formal unity which is almost a miracle.” Ted Hughes wrote in his poem Op.131, “Beethoven / Was trying to repair / The huge constellations of his silence / That flickered and glinted in the wind. / But the notes, with their sharp faces, / Were already carrying you off, / Each with a different bit, into the corners / Of the Universe.” The ensuring Presto for a moment gives us back Beethoven the gentleman of Vienna, a man of society, refusing to be obsequious to royalty, a witty, sensuous character of vigor and concentration – Beethoven the extrovert, producing music of clear purpose, building to a crescendo. The sixth movement Adagio is a transition back to the darker finale Allegro. Here Beethoven, bolstered by discipline, holds to a much-expanded sonata form. A galloping theme is intersected by increasingly complex cantabile passages, until the end when, says Wagner, “He smiles to himself, because for him this enchantment was but a game, his day is done.” Yet, Beethoven does not close the quartet in a wholly satisfied and reconciled mood. The undercurrent of strife is not banished.

Beethoven’s publisher, Schott, became alarmed at the composer’s epigraph. He wrote to Beethoven asking if Op.131 was in fact an original work, or was it, a la Handel, stitched together from pieces of previous works. Beethoven wrote back reassuring hm. Yes, it was “funkelnagelneu,” said Beethoven. Brand new.