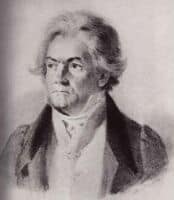 There are at least two commonly held but false impressions about Beethoven’s “late” masterworks: When first performed they were hopelessly misunderstood or even scorned, and they are so inward-looking and laden with dark mysticism as to be impenetrable to the uninitiated.

The Viennese public, accustomed to chamber music, immediately recognized these quartets, particularly Op.132, as profound and intricately-crafted works by a composer who for decades had displayed stunning originality and depth of feeling. Op.132, when premiered in private in September 1825, and in public two months later, was an instant success, as many contemporary accounts confirm. Beethoven’s nephew Karl provided this eyewitness assessment of the November public premiere: “As the people went away, they were talking about the beauty of the new quartet.” And on another occasion: “Listeners were either enthusiastic, astonished or questioning, yet all were so impressed that none condemned it.” Only the highly dissonant Grosse Fuge from the Op.130 Quartet proved bewildering (especially to a few exalted critics), just as it sometimes does even today. The myth of the late quartets’ impenetrability sprouted many years later as these works became well known and were compared side by side with quartets that spoke to a lower common denominator, including Beethoven’s own early quartets.

To hear the Beethoven late quartets only as the brooding and painful abstract communion between a deaf man and his God is to miss their many open-armed gestures to us: references to folk dances, long humorous passages, childlike tunes, and genteel statements spoken with classical strictness. While we readily accept Aldous Huxley’s awed description of Op.132 (“It was as though heaven had suddenly and impossibly become more heavenly”), we might as readily enjoy the social and democratic Beethoven who resides even in these late quartets, however far removed the man had become from society.

Beethoven was, indeed, much more socially withdrawn at the time he wrote Op.132, largely because of his infirmities. Visitors communicated with him by writing in “conversations books.” He was twice arrested as a vagrant. For one who died before medical science had so much as put the thermometer to use, Beethoven has been the subject to a great many exhaustive autopsies. His famous deafness is said to have been a form of atherosclerosis, with degeneration of the auditory nerve. It was socially debilitating, probably hereditary, and is today a condition routinely treated in an otologist’s office. Further, Beethoven suffered terribly in his final five years from acute inflammations of the lungs, chronic fevers, and hepatitis and jaundice so severe he was driven to his bed for weeks at a time. Beethoven, when he wrote his late quartets, was a dying man.

He was also, as Wagner reminds us, “a Titan, wresting with the Gods.” The first two movements of Op.132 were written in early 1825, when Beethoven was weakened by many months of recurring illnesses. Yet he worked each day on the Op.127 Quartet, and, ignoring his doctors’ orders, each night on Op.132. The troubled and passionate first movement, filled with rising mists and tumultuous bursts, shows Beethoven at his most experimental. He begins with formal sonata form in the Viennese classical style, then transcends it in ways utterly outside the aesthetic concepts of his time. Yet Beethoven never seems to have intentionally set out to be a conscious pioneer. “What is new and original appears of its own accord,” he said, “without one thinking about it.”

The second movement, says the Beethoven scholar Marliave, “gives the impression of a reincarnation, a peaceful well-being succeeding the long fever of the first movement.” It contains hints of eastern European folk music, likely put there specially for the nobleman Prince Galitzin of St. Petersburg, who commissioned Op.132.

Then in April, Beethoven fell gravely ill, enough to alarm his friends. He went to Baden, near Vienna, to convalesce, and by early summer had resumed work on Op.132. The third movement, the A Minor Quartet’s spiritual axis, was composed as he was emerging from this illness.

The third movement’s title, “A sacred song of thanks for one made well, to the Divine; in the Lydian mode,” should be understood less as a specific musical program than as Beethoven speaking, uncharacteristically, of his state of mind. The Lydian mode is a style of ancient church music Beethoven had recently studied, while preparing to write his Missa solemnis. Beethoven’s Lydian chorale of thanksgiving, rife with inner tension, is heard at the beginning of the movement, and recurs several times, later contrasting with an overtly dramatic section. At the start of the Andante, Beethoven again adds a diary-like marking, “I feel new strength,” and here, in typical Beethovenian late style, the rhythm abruptly changes, grows more complex. Then, near the end of this supreme movement, the Lydian chorale is divided among the four players, and Beethoven includes these words: “With the deepest feeling.”

The fourth movement, little more than a fragment, is a classical march in folk style which looks back across the solemn expanse of the “sacred song of thanks” to the peaceful well-being of the second movement.

The finale is spare and lucid, with the instrumental lines widely separate so as to sound almost orchestral. There are lingering strains of melancholy, but ultimately the movement is a vigorous triumph, built around one of Beethoven’s most memorable themes – one originally intended for the finale of the Ninth Symphony.