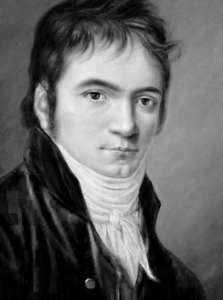 By the early 19th century the piano trio had come in for wider use as one of the most commercially viable forms. Beethoven, the free-lance musician, had as his Op.1 calling card to Vienna  a set of piano trios, and like other composers he sometimes used the piano trio as a more manageable and intimate form in which to present works of a large scale. He arranged his popular Septet for piano trio, as well as his Second Symphony, with lucrative results. Correspondence with his publisher reveals Beethoven likewise wrote this Trio in G Major with an eye on commerce.

“I am the tailor Cockatoo” was a hit song from a 1794 Singspiel by Wenzel Müller, in which the clownish main character boasts of being “well-heeled and debonair,” only to be “snapped up and hauled away for questioning” by the police. In his G Major Trio, Beethoven provides an introduction of mock-solemnity before stating this simple song without adornment. Ten witty and inventive variations follow, in which all three instruments are given solo opportunities before the final hunting-style variation brings the work to a crowd-pleasing close.

Best estimates have the Trio in G Major written in 1803, about the time of the Eroica Symphony, Op.121a. It was published thirteen years later, hence the misleadingly late opus number.