Starting at age ten, I attended my town’s First (and only) Baptist Church. Neither parent ever accompanied me, but even today I am thankful for their need or longing or guilt or whatever it took for them (that is, my mother) to send me to Sunday School. The Norwalk First Baptist called itself “High Baptist.” From time to time, I would hear the term uttered by grownups at church to somehow explain something I didn’t understand. I asked, if there’s a high baptist is there’s a low baptist? We were not low baptist, I was told. Low baptist churches were the kind of churches they had in Alabama, Louisiana, way down there, the low baptists. Such was the flicker which led to the spark which one day ignited my doubt, but before the doubting I walked each Sunday through the 1st Baptist Church buildings in a haze of young religious anesthesia, performing assorted churchly rituals & activities. In Sunday School, I suckled at the Jesus Tale, and rarely failed to read each week’s “lesson,” albeit sometimes I read it hurriedly on the morning drive to church in the enormous, leather, crowded backseat bench of a neighbor family’s car. I became a studious and participating, if taciturn, Sunday School student. 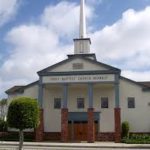 At church services, when my Sunday mornings at church spilled into Sunday afternoons, I sat in the high, hard pews, looking up at Pastor Bryant standing before his podium as he assembled his great, familiar rolling crescendo. The good pastor wore, without a trace of embarrassment, a black (too-black) hairpiece which was slightly pomped to cover a narrow swath of skull from front to back. He possessed assured and measured storytelling instincts, always starting with a joke or some pastoral scripture, either way inevitably winding up gently razzing some member of the congregation, maybe the church’s longtime treasurer Phyllis and if that joke went over well he told another couple of jokes. The pastor teased his flock. After a while the laughter died and we all settled down to listen to Pastor Bryant who after a contemplative organ passage reached down for his beefy voice which started languorously in his stomach and grew louder and angrier with terrific inevitability. Unabashed histrionics. His thunderous baritone ricocheted and reverberated throughout the church, until finally when he got mad, his voice barely a whisper into the mike, when he got damn good and mad, mad at blind sin and sinners and you Children of God who know right from wrong yet go on, knowing full well what The Book of James says directly to YOU – “Sin, when it is finished, bringeth forth death!” Pastor Bryant could shake his fist and make you feel it.

I admit, I might not have paid enough attention during my seven years in the Baptist Church to have achieved much of a religious education. I probably believed less in God than in religion, in the weekly investment of time and thought, in the need to give devotion to something larger than life, I didn’t know, and besides by then I’d become interested in the efflorescent bodies of my fellow church-goers, and even managed, while in states approaching biblical tumult, to trade squeezes with more than one girl in the back pew as the congregation stood and sang droning Protestant hymns – “Holy, Holy, Holy, Lord God Almighty!” Nevertheless, I came to know my Bible.

I was a fiend for mentally cataloguing Bible scriptures cited in the sermon. I can not remember why I did this, except it helped me compete in a game we played every week in Sunday School. It was a most serious game played not for fun but for honor, called “Bible Drill.” The Sunday Schoolmaster called out a scripture (“St. Luke, seven, thirty-eight!”) to the fifteen or twenty of us students, and we went flipping through our copies of The Word in search of it. First person to find the scripture bolted chair-rattlingly to his/her feet, shouted the name of the scripture, and began reading, flush with a victor’s soft petal glow (“Luke, 7:38. ‘Give, and it shall be given unto you; good measure, pressed down, and shaken together, and running over, shall men give into your blossom.'”). I was among the champion Bible-drillers week after week. I could find any book. Erza? No problem, dead-center in the Old Testament. Philemon? Sounds like it’d be in the Old, but it’s in the New, a single chapter buried at the foot of Hebrews. Deuteronomy? Easy, number five in The Book, and so on. I rarely remembered even the faintest trace of the scripture more than a few minutes, but I knew right where to find anything. (I quote a few scriptures here only after looking them up in a recently acquired King James; my boyhood Bible is long gone.)

Fast forward a quarter century to the present.

No one would mistake me for a religious man. For the sake of simple identification, let’s call me agnostic. My big blue English dictionary tells me in its microscopic print the term agnostic means “unknowing, unknown, unknowable . . . One who holds the existence of a First Cause and an unseen world are subjects of which we know nothing.” Agnostic was coined in 1869 by a Prof. Huxley of the now defunct Metaphysical Society, at the home of Society member Mr. James Knowles, on Clapham Common, London. The Prof. was referring to St. Paul’s mention of “the Unknown God.” So that’s me, then and now, I do not argue the matter with either side, believers or non-believers. I’m dumb on the subject.

Oddly enough, of late I have returned to Bible-drilling. I keep my King James next to the TV and whenever a scripture on a paper sign or a twin-size bed sheet is flashed before the cameras (we’re talking sporting events), I leap from the couch and rifle through The Book until I’ve Got It! Typically, I’m alone when this happens, so I always win, unless the Bible itself stumps me. But no matter how many people are in the room, I always win the drill because I’m the only one with a Bible. None of my friends walk around with Bibles, that of know of, but if they did, I’ve cool with it. 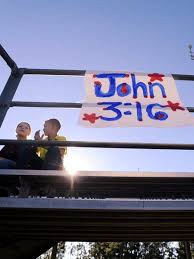 For years, scriptures flashed on sports screens only during the occasional NFL game (which seemed fitting, it being Sunday and all), and always, it seemed, it was the same scripture: St. John 3:16, “For God so loved the world, that he gave his only begotten . . .”

But now, far more scriptures are being called out, and at far more games – on placards in the stands at baseball games, in the galleries at golf tournaments. They are called out from behind the glass at NHL slugfests, and from banners draped over the railing behind end zones. Hardly an extra point is kicked without me bounding for my gilt-edged Court of Final Appeal.

Psalms 145:6. This flashed before my eyes as I watched the Seattle Seahawks score on a 2-yard Krieg roll-out to the right, bam, on a rope to the corner of the end zone. I lunged for my King James and had the scripture before the placekicker was lined up: “And men shall speak of the might of thy terrible acts: and I will declare thy greatness.”

The fact I was betting on Cincinnati and the TD put the game out of reach gave the scripture a momentary twist of irony (ha ha), but I was soon struck by the high expectations being made upon us viewers with the placement of these scriptures. Here was not your routine Hallmark Biblical quotations anyone with half a Sunday School education could remember, duh, let’s see, “For God so loved the world . . .” No, it’s like this: the people who place these painted placards and bed-sheets before our eyes expect us to look up these scriptures, read them for the first time, take them to heart, see the world through the prism of their wisdom. At least they hope we will. Psalms 145:6 tells us nothing less than the worse things get, the more the power of God is evident. Can you beat that? 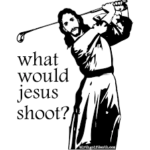 Here’s one I spotted while Hale Irwin pranced and high-fived jubilantly around the 72nd green of the U.S. Open, after sinking a – what? – 60-foot putt. Romans 10:9, “That if thou shalt confess with thy mouth the Lord Jesus, and shalt believe in thine heart that God hath raised him from the dead, thou shalt be saved.” Nothing ambiguous there. It’s the kind of scripture I normally turn away from discursively, for I like my scriptures to come washed clean of anything sounding too Mormon. But this time, for a moment, I did not turn away, for how could I have so swiftly swept these thoughts from my head when faced with the sight of a 45-year-old born-again golfer running in (it must be said) religious ecstasy on his way to winning Golf’s Greatest Prize?

I shalt not belabor it, other than to say with the rapid and multi-perspective flowering of scriptures on TV sports (just this weekend, I spotted Isaiah 54:17, Hebrews 11:1, Proverbs 19:26, and The Acts 5:42, a pattern?), questions are posed: Am I finding religion? Am I returning to my High Baptist Church for something I missed while surreptitiously eyeing the thigh of Mary McGregor? Am I watching too much sports? All right then, this weekend I’m leaving the TV o-f-f. Except you know there’s that one Notre Dame basketball game . . .