(November 18, 1985) Cesar Chavez and the United Farm Workers of America, AFL-CIO have called another California table grape boycott, the third in 20 years. The boycott is in response largely to the use of five EPA-approved pesticides on vineyards. The pesticides – captan, parathion, dinoseb, methyl bromide and phosdrin – and others like them are said to have caused an estimated 313,000 illnesses and birth defects among farm workers and their families. In addition, many hard-fought union gains are being undone. Mr. Chavez says California Governor George Deukmejian has shut down enforcement of the 1975 Agricultural Labor Relations Act, which protects farm workers’ rights. As a result, farm workers are suffering as they did in pre-boycott days: living in the field, sleeping on pesticide-treated dirt, bathing in irrigation water, carrying their drinking water in used pesticide containers, buying food at inflated prices, and putting their underaged children to work in the fields. The boycott of California’s largest crop was called in July 1984, but real momentum began building only last May. Now it is sweeping across the country like a warm weather front. This week, the boycott and Mr. Chavez have reached Pittsburgh.

Bartel: Has the boycott been successful so far? 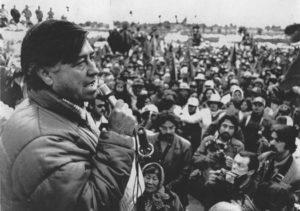 Chavez: It’s been very successful. In this short period of time we’re seeing some very definite signs of the boycott’s impact on the industry. We estimate there is twice the amount of grapes in cold storage now than there was last year at this time. The price of grapes has come down from $12 per box to $3.50 per box. We’ve also seen the price of grapes in the supermarkets, especially in California, come down considerably. So those are good beginning signs. There is also a lot of talk in the industry from middle management, and sometimes from the growers themselves, who are privately admitting that the boycott is hurting sales.

Do you think the boycott is going to influence enforcement of the 1975 law?

We don’t think it’s going to influence the law. We want the growers to do some of the things that the law requires them to do. They won’t because laws aren’t being enforced. We don’t think the laws are going to ever work. We’ve lost all hope that they will work. But what we are doing with the boycott is putting the pressure directly on the growers and getting them to act – first, to give us fair and free elections; second, to bargain in good faith; and third, to eliminate five of the most toxic pesticides that are now being used in the vineyards. We think the growers will come to terms with us long before the law works the way it should be working.

Are you recommending different pesticides, or simply the elimination of those five?

How long do you think the boycott is going to take before it works?

I have no way of saying, but we’ll stay with it as long as it takes.

Is your opposition more sophisticated this time?

I would think that they would be, but they haven’t shown us anything yet. You see, they’re in a no-win situation. If they come out and engage us out in public then they become controversial very quickly. If they don’t defend their side, then we just go ahead and do the boycott. It hurts them either way. But it’s quicker if there’s a controversy.

What kind of opposition are you encountering?

They’ve done pretty much what they did the last time. They’ve set up a front group they call The Farmworkers and Famers Coalition. There are no workers in it. It’s set up by a right wing research group in southern California, and this group is attacking us. And they’re advertising on national TV. They didn’t do that before. They have a program where they tell the consumer that for every pound of grapes they buy the coalition will contribute ten cents to charity. We don’t know how those will work but what we’re seeing is that a lot of people who supported us before are coming out in support of us again.

What does this group say when it attacks you?

They say we’re boycotting because we’re losing our power, and our membership is low, and we don’t really have an issue with them. I don’t think they’ve come to a decision how they’re going to oppose us. They talk about the union not having support among the workers, and such things.

Is there any truth to that? Does the union have as much strength as it once did?

Well, we have more members now than we’ve ever had in the history of the union. We have a better staff than ever, because they’re wiser and more experienced. We’re now employing direct-marketing, or a “high-tech boycott.” We’re in better shape than we’ve ever been.

Is it difficult to rally others around the country for what some people see as essentially a California issue?

Do you feel that some of your earlier work has been undermined, and you have had to start over again?

Yes, it’s true. In the vineyards we’ve won twice, and the growers have, by hook or crook, been able to destroy the victories, so we have to do it again. 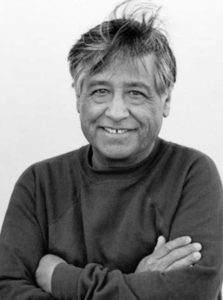 Do you personally, at 58, still have the energy?

You know of course that despite all that you’ve done over the years, there are a lot of people who hate you. Does that wear on you, or perhaps does it strengthen you?

Well, it’s a thing that makes life a reality. We have a lot of people who do not like us. So we get vilified from some, and we get praised by others. We understand that we’re a public figure and that’s life, so we don’t get elated when people praise us and neither do we get downcast when people vilify us. We came to that understanding a long time ago, so we’re able to function without being destroyed by dejection or by believing all the praise. It works okay.