In the late-’90s and early-2000s, I did work for the Recording Academy and Westwood One, serving as writer & host for The Classical Grammy Awards, a two-hour national radio broadcast surveying the nominees for Grammys in Classical Music. Each annual program included a few interviews with nominated artists. The following excerpts from the 2000 Classical Grammys feature tracks from interviews with the great German violinist Anne-Sophie Mutter and 2019 Kennedy Center Honoree conductor Michael Tilson-Thomas. Listening to the program for the first time in twenty years, I’m amused at the coaching I was given to bring “extra excitement” to the event. I could never have sounded so extra-excited had I not had seven years of practice doing commercial radio commercials, which exist in a different realm of excitement from public radio announcements. I don’t mean to say I was not extra-excited for the sake of the broadcast. Given the circumstances, extra-excitement came easy. It was the Grammy Awards! Have you any idea what the Recording Academy pays? 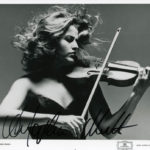