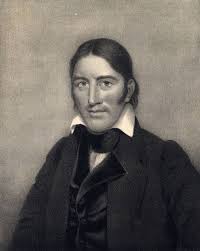 Driving east, cross TN. We’ve stuck to the blue roads, which are littered with dead critters – mostly rabbits and rodents but a few deer – and crowded with mobile thoroughbred stalls. All day the sky is pewter and rainy. Greenest state in the land of the free. And what is the cash crop that brings TN its most green? Why, it’s jabooby, of course. Good Southern name, ain’t it? Well, seeing as we’re down here in the grafa bag of America, we – my dear wife and I – blow keef all the way across the state. I suppose that’s how we decide to make the considerable detour to find the Crockett birthplace. It’s after dark when we arrive in the nearest big town, Johnson City. We check into a Ramada, turn on ESPN, the traveler’s friend, and fall asleep wasted, glad, anticipatory.

I admit, Davy Crockett was my first TV perturbation. I was three. What’s interesting is that it was likewise for my dear wife. She was a tomboy in a coonskin cap, an authentic one from Frontierland. 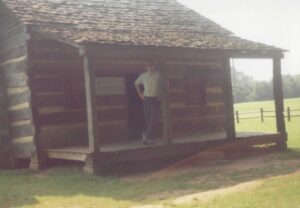 Next morning is sunshiny. We set out early for Davy Crockett Birthplace State Park, 25 miles into the forest and farmland. Now that the trees have grown back after deforestation, eastern TN looks like land untouched by the white man. There are green canopies. A single state-approved-brown sign points the way to the Crockett birthplace. We wind down a road that grows gritty and narrows to the width of our little red car. We stop a mile short, agreeing that it seems right to approach on foot. Nothing is said of Disney as we follow the cattle-lined banks of the Nolichucky River and enter the park, 66 acres, few visitors We see one campsite. The first Disney legend to be debunked is this business of a mountaintop in Tennessee. He was born in a valley, west of the Appalachian Mountains, 1786, in the “state” of Franklin, which was never admitted to the Union.

We prefer to think of Crockett as holding a place in American lore like no other man. His most famous utterance stands among the great for plain and simple American wisdom: Be sure you’re right, then go ahead. Actually, with the 1830 grammar restored, it reads: Be sure, always, you’re right, then go ahead. And restoration of the truth in matters of Crockett is the pledge of this state park. The small and tidy Crockett Museum does not sell trinkets and postcards, only a few legit history books published by TN Univ, including a facsimile edition of Crockett’s autobiography. Among the many wrongs the museum rights: Crockett was not six foot four in his stocking feet, but a stocky 5’9”. He did not ride a streak of lightning. He did not drink up the Gulf of Mexico. 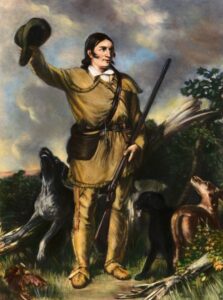 “Brace yourself,” says my dear wife, skimming a scholarly tome. “He didn’t wear a coonskin cap.”

Indeed, Crockett was generally averse to wearing the skin of animals. He wore a crushed felt hat. As a congressman, he wore a stovepipe hat that made him look like a rube in disguise. He played up this image. Quoth Crockett on the floor of the House of Representatives: I’m half-alligator, half-horse. My father can whip any man here, and I can whip my father.

We learn that Crockett joined Jackson’s army to fight Indians but did so reluctantly and only after an Indian massacre in the region forced the issue. Among the dead were his wife and children. He really did kill 103 bears one year (clearing the valley for a settlement), but he had no taste for killing people, red, black, white, or brown. Later in Congress, he fought the Indian removal bill at his political peril. Jackson, now president, killed Crockett’s career in Washington. We read the words of a scholar: “Crockett was true to Jacksonian principles after Jackson himself had given them up.” Voted out of office, Crockett told his western TN constituency, You might all go to hell, I’m going to Texas. 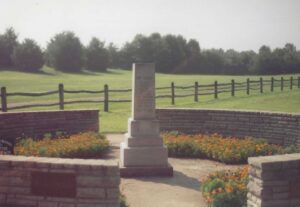 He didn’t go to fight the Mexican Army. He went to stake out a homestead. Crockett had fathered another two sons and a daughter. Alas, the Alamo. But it’s not Crockett’s death that is marked here at the park; it’s his birth, the start of a life lived nobly according to his time. On the well-kept grounds is a modest monument with tokens of respect from all 50 states. And there is the Crockett cabin, or a reproduction, the original crumbled with time. True to the best American lore, it is a humble abode. Charlie, I swear it has fewer square feet than your kitchen, and it has no kitchen, just a room.

But then, David Crockett was never one for the gilded things in the world: Most of authors seek fame, he wrote in his autobiography, but I seek justice – a holier impulse than ever entered into the ambitious struggles of the votaries of that fickle, flirting goddess.

“I’m glad we came,” says my dear wife. We hike back to the car, drive back into the park, and set up camp on the banks of the Nolichucky, within sight of the cabin in the middle distance. We share a stick of gage and salute Crockett and his reemerging humanity. In the morning, we awake to the sound of mooing cows. Hi 2 K.
Dennis 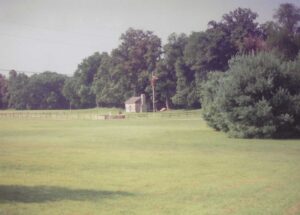 Notes: Originally published August 14, 1991, in the newsweekly In Pittsburgh. Charlie is Charlie Humphrey, then editor of IP. K was Kay, the elderly, cheerful, longtime receptionist at IP. Photos by mdw.