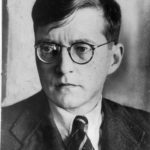 In winter 1948, during a Stalinist cultural purge, the Union of Soviet Composers in Moscow was abruptly summoned together by Stalin’s high-ranking commissar Comrade A.A. Zhdanov for a secret meeting, ostensibly to air opinions on the state of Soviet music. For three days, Zhdanov aimed his heavy political cannons at the composers, and what emerged from the meeting was the resolution of February 10, quickly passed by the Central Committee of the Communist Party, attacking many leading composers for failing to do their duty to the Soviet people. Shostakovich and Prokofiev were one-two on the long blacklist. The Party’s accusations were many and bitter: the music of this “circle of connoisseurs” failed to offer inspiration for the unfettering of the people from their burdens; these composers had allowed into their music “formalist perversions and anti-democratic tendencies” (i.e., dissonance) which, in its “confused and neurotic combinations,” did not truly reflect Soviet life. Zhdanov aptly stated Stalin’s views: “Not all that is accessible is a work of genius, but a real work of genius is one that is accessible. Bad, disharmonious music undoubtedly has a bad effect on man’s psycho-physiological activity.” Overnight, much of Shostakovich’s music, specifically his music which was introspective and darkly-colored, had been branded ideologically unsuitable, hence untouchable. The next day, a visitor to Shostakovitch home found the boyishly shy composer nearly ill with tension. “I was with him for several hours. He drank a bottle of red wine and smoked many cigarettes. He did not talk about the resolution. He said, ‘We must be quiet. And patient.’”

In ironic truth, Shostakovich, considered by fellow composers as the master, was partly in accord with the resolution. He accepted the principle of “paternal concern” by the Party, though he hated its bureaucratic strong-arming. Many of his works had shown a grand nobility. And in calmer times he had often expressed these thoughts: “I think art should be addressed to the people. They must be able to love and understand it; that’s altogether essential. I try to use clear language – sometimes I succeed, sometimes not.” But suddenly composers were going to prison for “formalism.” Shostakovich recanted before the Party. He said he would eliminate “pernicious elements” in his music, and proceeded to compose several works of patriotic vigor, including the oratorio Song of the Forest, in praise of the Stalin reforestation plan. It won the Stalin Prize in 1949, validating Shostakovich’s “rehabilitation.”

During this time, as he wrote the public music expected of him, Shostakovich continued to compose music that was inward or troubled, built of complex contrapuntal patterns and a free use of dissonant harmonies. He kept these manuscripts secret, and only after Stalin’s death in 1953 were they performed. Among them were a violin concerto, a song cycle on Jewish folk poetry, and String Quartet No.4.

The D Major Quartet’s framework is of perfect proportion, and in this way we’re reminded Shostakovich at his death was hailed by the Soviet government as a “remarkable example of fidelity to the traditions of musical classicism.” String Quartet No.4 is lucid and melodic, with a Jewish flavor introduced in the opening Allegretto. The Andantino shows us a sympathetic heart which remains unflinching. The third movement Allegretto takes us with kinetic drive to the final Allegretto that a critic called “a heavy-footed dance, in which the viola gives full voice to a Jewish melody.” The work concludes on a note of hard won serenity.