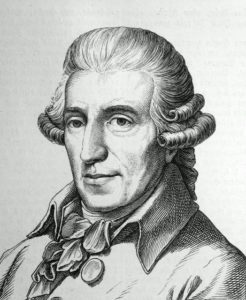 Haydn was a workaday composer in the manner of Bach. His career spanned six decades with never a fallow stretch. His most profound innovations seemed to come less from blinding inspiration than from unremitting industry. He invented the string quartet. Such a statement at first appears too grand and uncomplicated, for of course there were predecessors to the string quartet in Italy and Germany. But the differences between Haydn’s string quartets and their ungainly predecessors are extreme. Whereas four-part string compositions had largely been written for solo violin with accompaniment, Haydn gave each instrument a voice, and each spoke on equal terms. Further, Haydn gave the string quartet its organic four-movement form, thus instilling in the string quartet one of its most enduring values, variety within unity. When Goethe described the string quartet as “four intelligent people conversing with each other,” he was speaking mostly of the works by his favorite composer, Haydn. Then perhaps the statement is not so grand and uncomplicated. Haydn is to the string quartet what Edison is the electric light.

This D Major Quartet is one in a set of six composed for Johann Tost, a violinist in Haydn’s Esterhazy orchestra. It was one of Haydn’s last works from his thirty years in the service of the great music patron Prince Esterhazy. The Prince’s death in 1790 resulted in Haydn moving to Vienna, where he was quickly approached by the English concert manager Salomon, who, legend has it, came to Haydn’s residence and exclaimed, “I am Salomon from London and have come to fetch you. Tomorrow we shall conclude an agreement.” This Quartet was in the trunks Haydn packed for London, and it played a significant role in the composer’s tremendous eighteen-month success there.

Haydn was a self-reticent man (when visitors called at his home, he invariably put on his wig before answering the door), and this personal reserve is a guiding principle of his music. The Op.64 Quartets in particular also exhibit the acute skill and concentration required to construct full and conclusive movements from a single them.

Op.64 No.5 begins with wit. The opening moments seem to be presenting simple theme. Suddenly, about eight bars along, this theme is revealed to be a decoy! As if by magic it is transformed into an accompaniment, as the “Lark” melody soars on the wings of the first violin. (The quartet’s nickname was not Haydn’s own, but he accepted it graciously.) A section of taut dissonance and syncopation follows. This same pattern is repeated and developed, then after a final recapitulation of the Lark melody, the movement comes to a gentle close.

The second movement Adagio cantabile is built around a lyrical and ornamental cantilena by the first violin. The Menuetto is the Quartet’s best example of the kind of “conversation” Goethe admired. The second violin carries the melody, and in the movement’s final bars the violins are contrasted against the lower strings. The brisk Finale is a perpetuum mobile, propelled relentlessly by first violin virtuosity.