This time it’s a Quiz about learned frugality. This Great Composer was born into a land-owning family, meaning that his family was not rich but well-off. However, our Great Composer’s father, the family breadwinner, died five weeks before our Great Composer’s birth. He was raised by his mother, along with his four older siblings, and by the time he came of age the family fortune had dwindled to next to nothing. The upside to this misfortune is that our Great Composer learned how to save his money. And when he died he had a fortune of his own, partly because he lived frugally, and indulged in only one luxury – collecting works of art and fine violins. So who was this thrifty man with a huge stash of cash, this Great Composer? 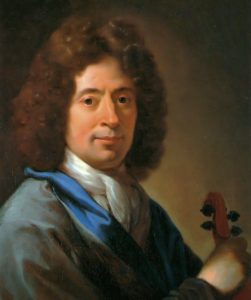 Answer
Time’s up, pencils down. The Great Composer who learned from his mother, Santa Raffini, the value of a dollar, or a lira, and when he was born, five weeks after his father died, she named the son after the father. The answer is Arcangelo Corelli, celebrated violinist and the driving force behind the development of the Concerto Grosso in the early 18th century. Despite his family’s misfortune, by his early thirties Corelli was rubbing elbows with and playing his violin for the likes of Queen Christina of Sweden and the Duke of Modena, who appreciated Corelli’s music so much he made the Great Composer wealthy. Corelli saw to it he kept his money safe, splurging only now and then on another fiddle for his collection.