This time, it’s a Quiz about giving up on the Bard. This Great Composer once set out to write an operatic treatment of Macbeth. Working with a librettist he apparently became seriously involved in the project. The librettist finished the first act, and sketches for the opera by our Great Composer followed. But the librettist stopped in the second act because, “the subject was too gloomy.” (What was he expecting? It’s Macbeth!) The project floundered, and then the librettist died and that was the end of it. So who was this would-be Shakespearean, this Great Composer? 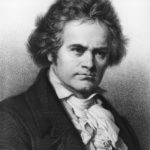 Time’s up, pencils down. The Great Composer who was working on an operatic treatment of Macbeth when the librettist decided he couldn’t stomach the doom and gloom of the Scottish King. The answer is Beethoven. The not-so-forward-thinking librettist was poet Heinrich Joseph von Collin. At an earlier time, Beethoven wrote an overture to Collin’s tragedy Coriolan, and his sketches for Macbeth are preserved. The Macbeth project was conceived in the wake of the failure of this opera Fidelio.