This time, it’s a Quiz without a name.  (You may give it a name yourself.)  This Great Composer was commissioned by a nationwide radio network to write a work for a program called Everybody’s Music. The radio network further requested the Great Composer not give the work a title, for the network wanted to hold an on-air contest for the best title of the piece. Our Great Composer finished the work in time for a mid-summer broadcast. It was performed live on the air, without a title. The announcer told the audience that a prize would be given for the most suitable title.  He said, “The prize has no great allure in terms of cash value, although it might someday be a collector’s item. Ha ha.” The winner would receive the original score, personally autographed by the composer. Over a thousand entries came in, and they were forwarded to our Great Composer, who was delighted with the great volume.  Then he replied by telegram, “Have read all title suggestions –stop – Astonished and delighted by number and variety – stop – no one title completely satisfactory.” So who was this man who would not play along with the radio marketing department, this Great Composer? 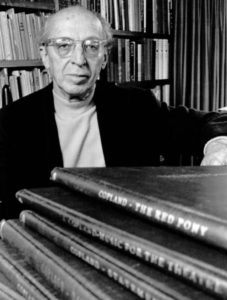 Time’s up, pencils down. The Great Composer who frustrated network executives at CBS Radio with his exactness. The answer is Aaron Copland. After Copland turned down the thousand-+ entries by listeners to name his newly commissioned work, it was given a holding title of “Music for Radio.” Eventually, somehow, it was named “Prairie Journal.” In Copland’s own catalog of his music the piece remains untitled.