This time, it’s a Quiz about hiding from war, but war catching up to you. When war came to the country of this Great Composer, he left the city and escaped to where one of his brothers lived, and then traveled to a neutral country where he took up a teaching post and stayed there to avoid the violence back home. His first pupil was a man who would himself become a Great Composer in time, though not nearly as great as our Great Composer. The music of some of his colleagues reflected the turmoil. but not our Great Composer’s. Instead of producing elegies and patriotic odes, he kept on keepin’ on. So who was this man waiting out the war, this Great Composer? Extra hint: Today is his birthday. 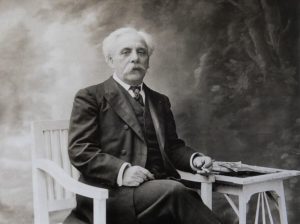 Time’s up, pencils down. The Great Composer who in his seventies escaped WWI, both physically and artistically, refusing to get caught up in the jingoism of war. The answer is Gabriel Fauré, who was never a nationalist in his music. He said, art is “a language belonging to a country so far above all others that it is dragged down when it has to express feelings or individual traits that belong to any particular nation.” Forty years earlier, Fauré the patriot volunteered to fight in the Franco-Prussian War, and saw action at Le Bourget, Champigny and Créteil, and was awarded a Croix de Guerre. While in Switzerland, Fauré gave lessons to the talented Andre Messager.