This time, it’s a Quiz about bullying. When this Great Composer was in school he was desperately unhappy. Why? Because he was often tormented and abused by his fellow students. He was a small, frail boy, as he would become a small, frail man. Later, a lucky break resulted in our 15 year old Great Composer entering a great conservatory. But apparently things did not go much better for him. Later in life he would recall, “I left the conservatory as stupid as when I entered it.” So who was this victim of bullying, this learning-challenged boy, this Great Composer? 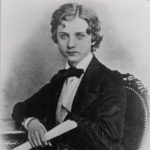 Time’s up, pencils down. The Great Composer who got pushed around and tormented in school as a boy, then as a teenager a lucky encounter with the Norwegian violinist Ole Bull resulted in him gaining entrance to the famed Leipzig Conservatory, but left there – as he said – “as stupid as when I entered it.” The answer is Edvard Grieg.