This Great Composer’s father was shy and bookish in his youth, and while young wrote seven novels (none were published). He was too improvised to obtain a higher education. When he married he invested in a small grocery store and he and his wife moved there. Illness caused him to quit working in the store, so his wife took over. When his wife became pregnant he was forced to start a publishing business. He published mostly his own books – they were of the Gothic horror variety, reworkings of old folk tales that included magic, intrigue and violence – but his most lucrative enterprise to was publish an Addressbook that listed businesses, factories, shops and homes in the region. So who was this man whose source of income was to become a source of info, this Great Composer’s Father? 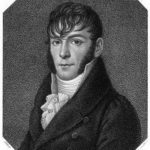 Time’s up, pencils down. The Great Composer whose father opened a grocery store but couldn’t run it, and wound up publishing his horror stories, like one called Solomon the Wise and his Fool Markolph, which told the story of a pharaoh’s desire for Solomon’s wife. Apparently there were hundreds of similar books during the time. The answer is August Schumann (right). His son Robert would one day likewise take a fancy to magic and intrigue.