Time’s up, pencils down, the Founding Fathers, beyond Thomas Jefferson, who could carry a tune. One studied the violin from an early age and later taught himself to play the flute; his first encounter with Jefferson involved music. Another Founding Father was a flautist and played duets at house concerts with his step-granddaughter accompanying him on piano. And then there was the Founding Father who could play five string instruments and harpsichord. 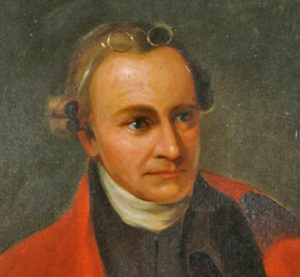 The answers: Patrick Henry (1), who first met Jefferson during Christmastime, 1759, at the Hanover County, Virginia plantation of Nathaniel West Dandridge, himself an unlikely revolutionary as he was living on 4,832 acres of land acquired through British law from the legacy of his mother, Unity West Dandridge. N.W. Dandridge joined the 130-member Virginia Cavalry Association, a volunteer cavalry, and was named their captain. At Dandridge’s plantation on Turkey Creek Jefferson met Henry and the pair quickly discovered they had the violin in common. Tom & Pat struck up a lively friendship over fiddling. Henry was Col. Dandridge’s lawyer and lived nearby. He would one day marry Nathaniel’s daughter Dorothea. 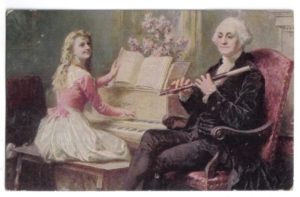 It so happens, just a year before the Henry-Jefferson jam, the niece of Nathaniel West Dandridge, Martha, married Col. George Washington (2), who later in life enjoyed playing flute and concertizing at home with his step-granddaughter Eleanor Parke Custis Lewis, who played piano. 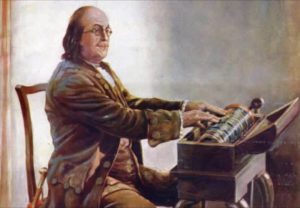 But these Founding Fathers were all put in the shade by the multi-instrumentalist Benjamin Franklin (3) who not only played all the instruments above, he set aside a room in his home for concerts, often with his daughter Sally, and invented an instrument: glass armonica. While in France, Franklin gave private concerts with his new music-maker, which was described thusly by one who attended: “The ear of a mortal can perceive in its plaintive tones the echoes of a divine harmony.”