Time’s up, pencils down, the Great Composer who wrote a work which was first recorded on this date, July 19, 1935, by Abbey Mitchell, who ten weeks later sang the aria as Clara in Porgy & Bess. Gershwin conducted the orchestra for the recording, which was not released by the Gershwin estate until 1974. The song has been covered over 60,000 times (67,590 according to the The Guinness Book of World Records) by artists as varied as Helen Jepson, the Met Opera lyric soprano who released the first record of Summertime, and Janis Joplin who recorded Summertime with Big Brother and the Holding Company. 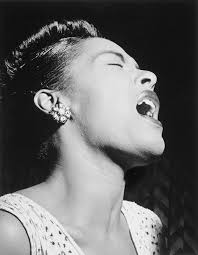 Billie Holiday (pictured) was the first to place it on the Billboard charts at #12 in 1935. Al Green croons the blues into it (“And the cotton is high!”). Diahann Carroll and The Andre Previn Trio play it at a cocktail tempo.