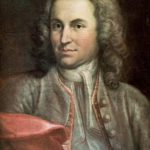 Time’s up, pencils down, the Great Composer who at twenty-two received an inheritance of about half his annual salary from his uncle on his mother’s side (his mother had died when he was nine) to the sum of half his annual salary at the time. This allowed our Great Composer to marry his second cousin, Maria Barbara. They had a fruitful marriage – thirteen years, seven children of whom four survived infancy. Our Great Composer was about to marry again, eighteen months after Maria Barbara died, when his aunt, that is, the wife of his late uncle, died and left another large chunk of cash to him.

The answer is Johann Sebastian Bach, who was twice bolstered at the start of a marriage by an inheritance from the same estate, fourteen years apart. The man who died in 1707 and distributed his estate partly to Bach was Tobias Lämmerhirt, a maternal uncle. Bach’s inheritance was equal to about half his annual salary. This allowed Bach to marry Maria Barbara.

Fourteen years later, Lämmerhirt’s widow died and left Bach the equivalent to a full year’s salary, just as he married Anna Magdalena, with whom Bach had thirteen children, six of whom made it past their teens.