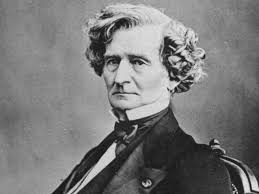 Time’s up, pencils down, the Great Composer whose first works were chamber music, and after that he never again wrote chamber music. His first instrument was the flute and his first compositions were written for flute, string quartet (and horn). He wrote a sextet based on Italian songs. He was pleased enough with it to try to have it published. That failed. After the chamber ensemble’s horn player died, our Great Composer wrote two quintets for flute and strings. He destroyed the quintets. He has never been closely associated with an instrument, least of all the flute, unless it’s the viola, but he did not write Harold in Italy for himself to play. He wrote it for Paganini, who, before the masterpiece was even finished, scoffed at it for not being difficult enough. Or, perhaps Hector Berlioz is most associated with unruly orchestras driven crazy by some demonic idée fixe.