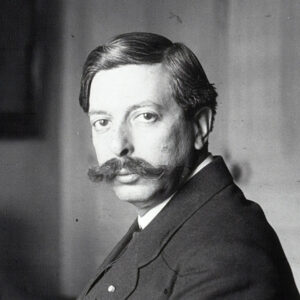 Time’s up, pencils down, the Great Composer who teamed up with Pablo Casals, was knighted by King Alfonso XIII with the Order of Carlos III, and founded his own piano school in his hometown, Barcelona, the Academia Granados, in 1901 when he was 34. Yes, the answer is Enrique Granados, and for a brief time, a dozen years or less, Granados was the Copland of Spain, beloved dean of musical Spain. Granados composed many revered works which stand as pillars of modern Spanish national music, notably his suite of six piano pieces Goyescas based on paintings and a tapestry cartoon by Francesco Goya, made a half-century before. Goyescas was fashioned into a one-act opera of the same name, and it was from the triumphant premiere of Goyescas at the Metropolitan Opera that Granados was returning home in Barcelona when German U-Boat torpedoed the streamer he and his wife Aparo Gal were on in the English Channel. Granados, a national figure in Spain, died four months shy of his forty-ninth birthday.

I have a personal affection for a recording by the great Barcelona pianist Alicia de Larrocha, who studied with Frank Marshall, a pupil of Granados. Marshall wrote of his teacher, “Granados manages to capture all the elegance, subtlety and aristocracy of eighteenth-century Spain. He stylized, formalized and polished the folklore of his music.”