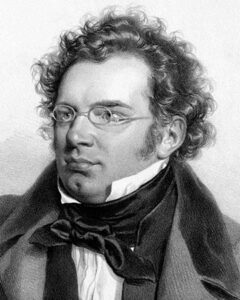 Time’s up, pencils down, the Great Composer who got himself arrested after standing up for his politically-minded friend with a few choice words for the police who came to investigate the poet. The answer is the young Franz Peter Schubert. The arrest took place during a gathering called a Schubertiad, in that musicians, poets and artists seem to come together around Schubert at the spacious apartment of Ignaz von Sonnleithner in the Gundelhoff (Brandstätte 5, Vienna). Austrian police were on the lookout for radical political activity, and a gathering such as this one set off alarms. Schubert and four others were busted, notably Johann Senn, whose revolutionary sentiments, which he put down in writing, were under investigation. Senn was tried and convicted. He spent a year in prison and then exiled from Vienna forever. Schubert and the other three were “severely reprimanded” for “inveighing against police with insulting and opprobrious language.”