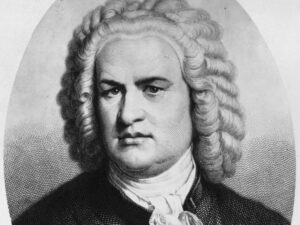 Time’s up, pencils down, the Great Composer who was fixated on 14 and 41 (Seaver’s uniform number), often using the numbers in his music according to the ancient tradition/science of Gematria in which one’s name is added up numerically. Germatria can be traced to Sargon II of Assyria in the eighth century BC. Sometime in the first century AD, Germatria began to be used in Jewish hermeneutics (the interpretation of biblical texts).

The answer is B=2 A=1 C=3 H=8 = 14. He was not Jewish, but during his day there was theological interest within Bach’s Lutheran Church in numerology of this sort. He frequently included 14 and/or 41 in his music, for instance, his 14 Canons on the Goldberg Ground (the first eight bass notes of the Goldberg Variations aria), The Art of Fugue (14 fugues), the Canonic Variations on “Vom Himmel hoch da komm’ ich her” (the cantus firmus is 14 bars; 41 bars in the first two canons), and when asked to join the newly formed Correspondence Society of Musical Science in Leipzig, Bach waited until his membership would be the fourteenth. By the way, Germatria also can be applied to J.S. Bach: J=10 S=17 B=2 A=1 C=3 H=8 = 41.

Besides the number on his uniform, Seaver may have shared Bach’s fascination for 14/41. Seaver made the NL All-Star squad in his rookie season, 1967, and had to wait 14 innings before finally entering the game and got the save; in 1976, the year before he was traded by the Mets to Cincinnati, Seaver won 14 games and allowed 14 home runs; during the strike-shortened season of 1981, Seaver led the National League with 14 wins; upon his return to the Mets in 1983, Seaver lost 14 games, the most in any one season; Seaver retired from Baseball at age 41.