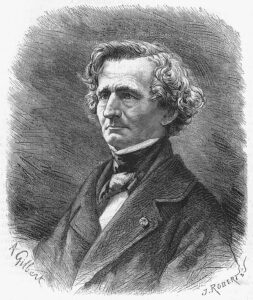 Time’s up, pencils down, the blushing Great Composer, sardonically mocking, who had a list of pet dislikes, and once when he heard music that got under his skin he thought he looked to others as if he’d received an unpardonable affront! The answer is Hector Berlioz, who was free to express himself as he pleased, seeing as he wrote words and composed music as a freelancer. His criticism and essays appeared in the most respected and widely read music periodicals in Paris, but he was never employed by them. It wasn’t until he was forty-six that Berlioz entered into his first, what we might call, official job, as head librarian at the Paris Conservatoire.