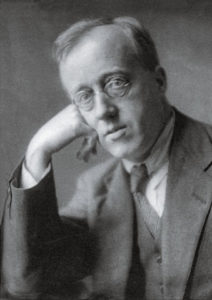 Holst spent his adult life teaching in private schools and colleges. His genius for inspiring beginners was beloved by scores of pupils. His teaching methods, considered at the time unorthodox, were based on the practice of “learning by doing,” and his elementary harmony pupils spent their class time with him making up songs, then finding different ways to sing them. He organized gatherings every Whitsun for his amateur choirs and orchestras to come away and make music for three days.

As a young composer he groped while developing slowly, was prone to hero worship (Mendelssohn, Gilbert & Sullivan, and above all Wagner), and impressed his teachers as diligent but lacking some of the necessities. Holst hated textbooks. He began setting his own translations of Sanskrit verses from the Rig Veda without ever having heard Indian music. Learn by doing.

Holst found the fame heaped upon him for The Planets a terrible nuisance. “It made me realize the truth of ‘Woe to you when all men speak well of you.'” Holst, instead, treasured the kindly attention of his friends, who seemed all to have agreed that he set “a terrifically high standard of being companionable.” He composed during summer holidays with never enough time. Sophisticates in London found him naive, but Holst apparently didn’t mind. He loved “the fantastic unexpectedness of life.”

His music reflects clear thinking free of self-consciousness, and a high devotion to rhythm. Much of it, like this unassuming suite, was written for his pupils (he taught at the St. Paul’s Girls’ School in London from 1905 until his death). Its four short movements make use of an old English country-dance tune, Dargason, and the famous Greensleeves (with his lifelong friend Ralph Vaughan Williams, Holst roamed the British Isles in search of folk-songs), and a tune based on an Arab song that Holst made note of while traveling with his wife in Algeria.