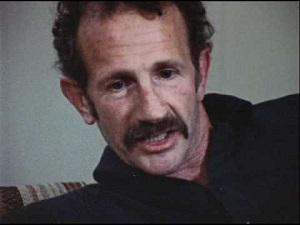 Ashes: Poems New and Old by Phillip Levine (1928-2015) won the 1980 National Book Award and the National Book Critics Circle Award. In the Summer of ’80, I read it and thought he was talking directly to me, the son of blue-collar workers. I wrote to Levine and arranged to fly the two-hundred miles up the California coast to Fresno for an interview. In all my travels to speak with writers this would turn out to be one of my most difficult trips, due to complications with my audio equipment, which was sent to Fresno on an airplane without me. I almost made it on the plane. Boarding was closed, but I walked up the tunnel to the plane anyway, hoping to talk my way aboard. Imagine doing that today.

I arrived four hours late. Yes, I called from San Francisco to tell him I was renting a car and driving down to Fresno. His wife took a message. Philip Levine lived in an achingly middle-class rancher on a benumbing middle-class street in a stupefying middle-class neighborhood. At the time I remember thinking this is where the great poet of the voiceless working class should live, in touch with the truck drivers, waitresses, and factory workers he writes about. Despite my early evening arrival when I had been scheduled for a two o’clock interview, he opened his front door and graciously let me in, offered me iced tea, and patiently answered my questions until I ran out of them. 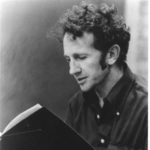 Levine was born a year after my father, one year before my mother. I felt I knew him the moment our eyes met. He is often called our age’s Whitman, but Levine was not Whitman. Whitman sang as he celebrated the worker. Levine spat the worker’s bile. Swearing like a word worker, he shamed oppressors of the worker. Levine, to coin a phrase, knew what work was. He began working in a Detroit auto factory as a teenager. When I met Philip to talk about his work he was teaching poetry at Fresno State.

5  –  In his mid-twenties, Levine earned the MFA at the University of Iowa Writers’ Workshop, where he studied first with the grand old Robert Lowell, and then for fifteen weeks with the legendary “English Poet from Oklahoma” John Berryman.  –  05:44 Minutes 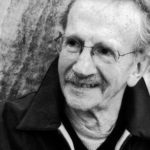 That December, Philip Levine sent me a letter in which he talked about finishing ten weeks as writer-in-residence at the University of Alabama in Birmingham. “I got a kick out of it. The people were wonderful to me, and the students were far better than expected. They were as sharp as any I’ve encountered. And so grateful for anything.” Click here to read the letter (PDF will open in a new Tab).