The general sense in this tiny country seems to be that the threat of war with its Arab neighbors has, for now, been pushed back from the brink. Less life-threatening concerns share the headlines equally with the peace talks and the occasional attacks upon Israeli motorists.

Among those concerns, perhaps foremost, is education, which is thought to have been in decline in Israel for at least the past decade. The heated clashes have been exciting to watch. 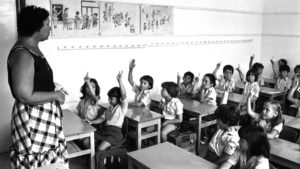 Last month, 1.6 million children filled Israeli schools after the two-month summer vacation, 90,000 of them recent immigrants from the former Soviet Union, Ethiopia, Yemen, North Africa and elsewhere. They nearly did not make it back to the classroom at all. A threatened teachers’ strike was averted just hours before the first school bell was scheduled to ring.

Teachers’ unions, able to bargain en masse in Israel’s highly centralized school system, demanded the government sign a declaration unconditionally promising to increase funding for education, including higher teachers’ salaries. The government responded by saying that if teachers were to be paid more they would have to work more, including shorter summer vacations and an increase in classroom hours. It also proposed a sliding wage scale according to the relative importance of the subject taught.

Negotiations disintegrations into name-calling as the newly appointed education minister Shulam-it Aloni accused the teachers of “moral slackness,” and the teachers shot back that Ms. Aloni should keep her personal attacks to herself. In an uneasy settlement, the teachers accepted a 3.8 percent pay raise, retroactive to September 1991, and Prime Minister Rabin was able to announce proudly that after 10 years of cutbacks classroom ours would actually increase this year.

Meanwhile in northern Arab towns and villages, local council heads, seeking 150 million shekels for sewage networks and additional classrooms, were staging a general strike that had shut own al municipal services for 11 days, including the first two days of school; 250,000 children stayed home while hundreds of Arab protesters went to Jerusalem and chained themselves together outside the prime minister’s office.

It looked like a stalemate. Mr. Rabin announced that his government had already doubled the budgets of the 50 chronically under-funded Arab local councils and no more would be forthcoming. Ten after meetings that went deep into the night, about half the money was promised, plus another 50 million in loans, and the strike was called off.

But getting children into classrooms is, of course, only the first step. Like their American counterparts, Israeli educators have for years been measuring the performance of their students in achievement tests and graduation rates to that of the Japanese and coming up distressingly short.

The problem seems to be more than lack of funding. Listening to critics of Israeli education, one comes away with a sorry picture of discipline within the average Israeli classroom. One former teacher, Haim Chertok, said it invariably took him at least 10 minutes after recess to get students to return to class and settled down, and that noise from the corridor outside by other students and adults was also a significant distraction.

“I would estimate,” said Mr. Chertok, “that up to half the instructional time was squandered.” He suggested much of the problem stems from the fact that the Israeli education system is so insulated from citizen (i.e., parental) control.

Most surprising to this American gentile observer is that here in, of all places, the homeland of Jews, the classroom study of Judaism has suffered a marked diminution. Naturally this has become a source of deep concern among the religious population. (The great majority of Israelis are non-religious, but religious Israelis make up a highly vocal and influential minority.) Jewish texts were once mainstays of the elementary and high school curriculum, but in recent years, as Israeli society has grown more secular, the Bible, the Talmud and other sacred Jewish writings have played an ever smaller role in the education of Israeli students.

The appointment of a secularist education minister in Ms. Aloni only promises to continue this trend, and this has provoked many bitter attacks from religious quarters. No less than the Jewish birthright is at stake, religious critics claim. The late Ya’acov Hazan said sarcastically that while secular Israel dreamed of creating a generation of apikorsim (heretics), it in fact has created a generation of amaratzim (ignoramuses). 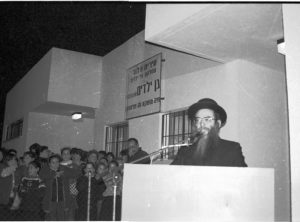 Rabbi Shlomo Riskin, dean of Ohr Tora Education Institutions (right), decries the reduction and ghettoization of “Jewish studies” as a result of “political poison in the air, and a general disdain for all things ‘religious.’ Granted that secular Israel has difficulty with the concept of God. But clearly it does not recognize the grandeur and wisdom of our Jewish national literature, the legal codification of our morality, the mystical flights of our visionaries and the ethical pietistic works of Hasidism.”

Here in this sleepy town in the Negev Desert, where there appears to be not one Hasid among the population of 2,800, I asked a group of four teen-age students, all native Israelis, about the issue. They shrugged.

“We study the Bible but only as history,” said Yael Gilroa. “It’s very good for geography.”

Shani Goldesmin was more emphatic. “I’m not religious and I don’t want to study the Jewish writing. I’m glad they’re not part of school. My head is already filled with enough.”

Rabbi Riskin, by way of compromise with the secularists, said he would like to see the day when every Israeli student can quote Isaiah by heart, “albeit one believing he is mouthing the word of God, and the other believing he is quoting a great sage who represents the highest of human achievements.”

When I asked the four students about Isaiah they at first didn’t know who he was. “You mean the basketball player?’ asked one.

To quote the Prophet (not the Detroit Piston): “If they speak not according to the word of their God, it is because there is no light in them.”