Michael Shepler is wonderfully prolific, the first sign of a true poet. His first published poems date from 1965, the year he began to study with Henri Coulette at Cal State LA., just as Coulette’s book 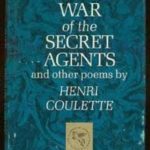 The War of the Secret Agents was named by the Academy of American Poets winner of the award formerly known as The Lamont Poetry Selection which honored a poet’s first book. The list of past winners forms a tidy who’s who in post-war/pre-millinieum American poetry: Ai, X. J. Kennedy, Carolyn Forché, the two Donalds – Hall & Justice, Mary Jo Salter, Garrett Hongo, Sharon Olds, Tony Hoagland, Gerald Stern and more.

Michael Shepler’s stay at Cal State was a heady time for the college. Along with Coulette, among those who walked the hallways were novelists John Weston and Christopher Isherwood. While I don’t know Michael personally, my relationship with his poetry is personal and has been ongoing since the late ’70s when I was editor for Statement, the lit mag of Cal State LA. For me, Michael’s poetry is ongoing, the previous poem always faintly present, slowly resonating, until I read the next Shepler poem which compels me again to the page/screen as the poem finds something in me that is rarely found, or, rarely in me. Each encounter with Michael Shepler’s verse is like resuming a compelling conversation with a friend. However long I stay in the room with the poem the richer the experience. I am glad, proud and honored to offer to you a small sampling of his tremendous lifelong body of poetry.
Take a look at one review of a volume by Michael Shepler. 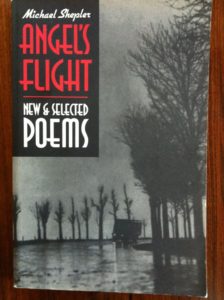 Today, Michael posts a new poem on his Facebook page every couple of days. Many poems speak immediately and directly to our times, others speak from memory, and each new poem appears to have been carefully aged years in oak casks. I’m hardly alone in my admiration of Michael’s work. Many celebrated poets and scholars have expressed their praise, including Coulette, Allen Ginsberg, Kenneth Fields, Lauri Scheyer, and Louis Simpson. I join these distinguished writers in appreciating Michael Shepler as a true poet whose verse reaches and reveals.

Return To The Lost City

Not budgeted for pith helmets & goofballs,
We’ve found drinking snake medicine produces
Visions of breathtaking beauty.
Pola Negri is gone, & Gustav Frohlich.
What of Debra Paget? Does she frolic still,
White-haired, shriveled? Barely able
To go into her dance–
The legendary Dance of the Cobra?
Perhaps she’s resurrected every century like She?
A quick dip in the Eternal Flame & she’s hot as she ever was!
Really, there’s no one here.
No image soils the desert eyes of glowing mirrors.
The walls of the torture chamber grow too crumbly
To sustain their chains.
Eunuchs, maidens, dwarfs–how we used to party!
All of them gone. All that remains
Some bits of unraveled gauze
From the night the mummy did the Watusi,
The outline of a dusty rose.
m. shepler 7/8/20

Having traveled the halls of academy & industry
Palaces of endeavor where death goes unnoticed
He’d become a dreamer among swans
Spending long afternoons in neglected gardens
Tonight he’ll dive into fathomless waters
Swim the lake toward the distant skyline
In the morning he’ll pawn his suit of lights
Leave the city, start again, hair straight on end
Somewhat tanned from his days outside
Possessed with a new quiet certitude
Thanks to years of dissipation & anxiety
m. shepler 7/2/20

SUNSET OVER VILLA ORTUZAR -AFTER BORGES

Here the world ends
The street mouth deepens, opens onto night
Bonfires become rows of immolated angels
A fever dreamer’s sunset agonized on the wire
Wire which tears the sky’s skin
A world discarded out of disgust, neglect
Scraps of light, scattered bright rags of a swimmer
Pool by a bus stop where frightened girls huddle
The landscape, losing definition, dissolves
Cut-purse night lurks in the barranca
The day’s riches plundered, divided & spent
Voices of thieves quarrel in my head

ASPECTS OF THE NOVEL – for Richard Yates

He insisted on smoking in the car while sucking
On the oxygen tank; & the car itself, so junked
& broken, gas fumes curled through the cracked
Rolled up windows, further hindering him
In his abstract meanderings down the Dixie Highway.
He lectured his students, ‘Aspects of the novel’,
Claiming he wrote no more.
All the while pages fell, scribbled leaves
From his stammering machine.
The manuscript grew, bulky, unread;
Stacked in the refrigerator, rubbing shoulders
With limp vegetables, moldy sandwiches.
He stashed a bottle of Everclear in the closet,
Unopened, kept his pencils sharp, desk cleared
For action. Every day behind thick glasses,
Held together with bandaids & Krazy Glue.
Behind his unvoiced inscrutable motives
His fractured heart fluttered in its cage.

MESHES OF THE AFTERNOON

Your shadow picks up the flower
As you ascend the stairs
Someone within the apartment is watching
Hidden after you come inside
A mix of cigarettes, sweat & fear

In the empty room faucets drip
Twigs crackle in the fireplace
Garments burn, a sleeve twists
Blackens then curls in combustible sleep

POEM IN THE MANNER OF CHI’N KWAN

At the edges of a hidden stream they huddle
Above their golden heads, clouds twist
Untongued, animate, soaring

Beneath these trees, drunk with light
We spin, blissful, directionless

The empty voices have departed
A single lamp burns inside the house
Night wind scatters flowers
Petals fall in patterns of random confusion
At the edge of the porch
Stands a figure with a rake
Slumped shadow, shoulders bent
Too tired to sweep them up

The door stands open, yellow, grinning.
Inside, silence is a soliloquy unto itself.

Dishes done & stacked, except for a half-filled
Cup of cold steel.

Keats nightingale, deafened by jackhammers,
Yammers in the trees.

A breeze slams against my blue-eyed broken windows.
Sky turning purple as a bruise.

Lashed to the podium like Ahab to the whale,
The splintered man sweats blood beads.
His red specs bleed beneath stained glass light.
His faraway eyes lock on a tumbler
Of amber liquid. The Grail!
It’s his, once he utters
The last stanza for which he’s being paid.
Later, chasing coeds
Through the halls of the Green Hotel,
He shouts “Feets don’t fail me now!”
His best Mantan Moreland, he’d allow.
Tackled by a nurse with hypo, he’s put down.
Coming around, he fumbles an unstrung rosary.
Villagers with torches bear him to the train.

SUN IN AN EMPTY ROOM

Something’s painting this tired afternoon
Choosing a palette of yellow & shadows
Daubing an empty room haunted by whispers
A faint perfume of night’s allure lingers
Exhausted light sprawls across the bed
An unpainted phone, insistently ringing
Cars pass below the open window
Transporting strangers on inscrutable errands
Inside’s all angles, blocks of light
A sunny scene of uncommitted crime
No one in the room has been sketched in

Watery light dances on the surface of the Municipal Pool,

The second story row of windows are flooded

Inside, the empty diving board vibrates

The lifeguards are off duty in the quiet summer evening.

Hidden inside the pooled shadows

The lifeguards stand in helpless knots.

The red glow of their cigarettes pulsing,

Immobilized by the gravity of the emergency.

i would walk deserted streets

& the neons did shine
whiskey bottles 50 feet tall
going into orbit!
dark cars slow then speed past me
they monitor my movements
& the men in the penthouse
update my dossier
dining on cheap takeout food

they move carefully
thru each chamber
of the
world.

furtive jugglers, sometimes joyous
the dances are there
to step to
capering minstrels
eke a living
amid rubble
& mud.

thru villages
cross/t borders,
boundaries
w/ out passports
or cards
of identity.

or silent,
chary
afraid to expose
their wares:
remembering the 1000s gone—

sage is fool
sage is sacred

the black smokestacks
the brick/t wall

sweating out dawn
w/ a thin sheet
clenched
between their teeth

separate, sometimes
they recognize one another
across distances
of cocktail party
& exercise yd.

dancers, yes.
their stumps
bleeding / stomp
out a hymn
pounding tambourines
by a pond
at sunset.

they only do
as they must

put one foot
first
in front of
the other—
right
before left
& left
after right
toward a glowering
horizon,
promising nothing.

facts of the matter become blurred
sharp pain might almost equal ecstasy now
anything but this fearsome dullness of days
accumulation of disconnected moments
is this what knowledge has to offer me?

i say ‘love’ now
& am fritened

We burn with fire, the fire dies down.
Years fall like leaves, like dreams.
Flames devour the wedding gowns.

Each arrives, a stranger in town.
We cross the green toward the tavern’s solace.
We burn with fire, the fire burns down.

We leave the bar to stroll the town.
Window gazing, an alarm sounds.
Flames are devouring the wedding gowns!

Night throbs with a fretful sound.
Drenching dark cloaks the ruined store
Where flames devoured the wedding gowns.
We burn with a fire, the fire dies down.

Routes to the border were rapidly tightening
Rough saints sharpened totalitarian knives
The doors of perception, double-locked, beckoned
Parents wrung their hands in the blood of lambs
The Fox lot was transformed into Century City
We could hate LBJ, but just for a day
Winter was upon us wearing nights of white satin
Star maps, burning, lit wayfarers home
Something was cooking inside Hell’s kitchen
Our children, poor children
Forgetting us, grew frightened

Distant light saturates the wet iron rails
Bracketing the steps of the Lincoln Heights jail
It’s only the moon, out on parole
Tracking our relentless night patrol
From tavern to tavern, Eastern to Brooklyn
Past houses of slaughter which run along Slauson
Lights which are red & never green
County General where the mad rave & dream
One of those evenings, one of those nights
When nurse & orderly lace straitjackets up tight
& the Stations of the Cross in deep cover disguise
Are best viewed obliquely through dilated eyes
So pack up your troubles, sew up the shroud
Life’s only bearable lived in a cloud
Where angels sing doo-wop from a glittering juke
& not much stock is placed in the truth

What were we talking about
When the lens trapped us?

Standing, somewhat abashed, near the edge
Taking shelter in the remaining darkness

Arrgh!
as they say in the cartoons

as he is mowed down by the
superior fire power
of abstracted hate.

I scream it to you now.
here.
safe.
in a room.
in
these
united
states.

(Editor’s Note: More to come. Check back here every few days for another Michael Shepler poem.)