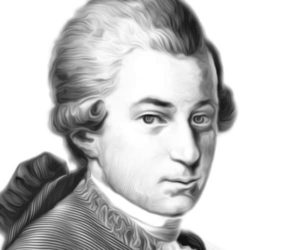 This sociable piece de salon was written during the 22-year-old Mozart’s disastrous seven-month trip to Paris. He went there with his mother, traveling from Salzburg in their own chaise and financing the journey en route by arranging for Mozart to give concerts in cities along the way.

In Paris, Mozart hoped to secure a permanent position and thereby finally free himself from the stifling life under Archbishop Colloredo. Instead, he was offered only a humble post as organist at Versailles and perhaps because Paris was then absorbed in a fracas between the City of Light’s two leading composers, Gluck and Piccinni, he received only a handful of commissions. Then came the tragedy of his mother’s sudden illness and death, leaving him alone among foreigners, and forcing him to rise to a new maturity. During this time, the young composer even suffered his first unrequited love, for the pretty 16-year-old soprano Aloysia Weber in Mannheim. “I really cannot write,” Mozart wrote in a letter to his father, “my heart is too full of tears.”

Wolfgang openly despised French music and French taste, but he composed this Concerto for Flute and Harp to satisfy a commission from the Count of Guines, an enthusiastic amateur flutist, and his daughter who had taken up the recently fashionable harp. Rather than exploring deeper emotions, the work is a shimmering example of the princely galant French style, overflowing with melodies. Mozart scholar Einstein calls it the musical equivalent of a Boucher painting: decorative and sensuous. It displayed with only tactful musical demands the aristocratic father and daughter in the most charming and flattering light they’d likely ever enjoyed. Alas, the Count was not entirely appreciative, and put up much resistance to settling Mozart’s fees.