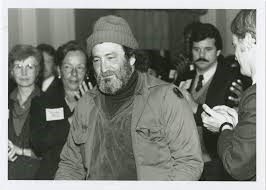 In the wake of the recent death of Mitch Snyder there came the trail of officialese drawing the outlines of his life and death. The important newspapers printed small pictures of Snyder’s angry face. He was described as “a man of action for the nation’s homeless.” He was situated in the realm of celebrity: “His crusade was highlighted in a TV movie four years ago, staring Martin Sheen.”

Apparently near the end, Mitch Snyder was pissing off people on all sides. He’d taken bites out of the money and law people. He was pissing off people even within the movement. “He used anger as a weapon,” said a chairman in the homelessness movement. No offense, but its not what people said about Snyder that matters, it’s what Snyder said to people on the street: Do not cooperate with the census. Snyder told them the census is the way the system in the United States works. Why should they participate in this system? In this system they live like dogs.

Snyder was born in Flatbush, Brooklyn and at nine saw his father leave the family. Seventeen years later, Snyder would do the same to his own family, wife and kids. He just took off to hitchhike across America. One of his first nights, he had not even gotten out of Connecticut, he took refuge from the cold and dark inside an unlocked car, which turned out to be stolen. Snyder was asleep when the police woke him and cuffed him. He was convicted of transporting a stolen vehicle across state lines, and thrown into the Danbury Federal Correctional Institution.

It so happened, the prison also held Philip and Daniel Berrigan. Snyder began attending the Berrigans’ meetings. At the brothers’ direction Snyder studied the Bible and took part in hunger strikes for prisoners’ rights. At Danbury, he found his path and purpose. 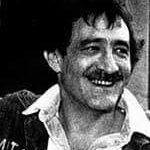 Mitch Snyder said he worked “in the heat of the struggle.” Being caught up in it, he neglected God. He was planning to visit a monastery to reestablish matters. Snyder also neglected his longtime companion and co-advocate, Carol Fennelly. (Husband and wife without the validation of the system.) They had planned to marry in September after fifteen years together. Last month, they called it off. He took his own life. The press reported Snyder was depressed over waning public support for the homeless, pointedly exemplified recently when the Washington, D.C. City Council repealed the city’s “right to shelter” law. Snyder had worked hard to pass the law. He worked hard to stop its repeal. Then he hung himself in an office of the the Community for Creative Non-Violence, the homeless shelter – halfway house – soup kitchen – medical care unit – beacon of light in the darkness place to go for homeless people, a place Mitch Snyder created out of nothing – no money, no interest, no cooperation. His body was not found for more than a week. In a suicide note, Snyder wished Carol had loved him as he loved her. He was forty-six, an early death even for a homeless man. Plunk. Another penny in the vast Ocean of Despair.

Before the ripples of Mitch Snyder’s death disappear completely, I want to blow the whistle on the sort of problem, going on today, which would have caught Snyder’s attention. It is a modest problem, no one is beaten or killed. No one is put out of their house. No one goes to jail. Only ripples of a problem.

My neighborhood is speedily restoring itself from worse-for-wear to red-brick splendor and boutique perfection. The restoration has a long way to go, but a strong gentrified foothold has been established. Homeless men and women are abundant here, particularly around the commercial districts in the vicinity of the fresh food market and the convenience store. They have been in abundance the four years I’ve lived here; bone-poor people nursing shorties of cheap stuff, sleeping on stoops.

“Hey, wad ya drinkin’?” asks the young restorer in his weekend shorts.

“Ahh,” says the man sitting on the sidewalk, smacking his lips, “burgundy. Hey, you got a couple nickels?”

“I’m all plastic today, grandpa. No cash, not even a coupla nickos, sorry.”

Just for fun the prep adds, “Unless you take a card. Haha hahaha.” His laugh turns sarcastic, “Ha.”

In my neighborhood, it is rare to walk three blocks without being solicited for change. Sometimes I give, sometimes I don’t, but I’ve never been harassed or cursed. I can’t recall a time when I did not go into a store because a derelict stood outside its doors. This may not be true of others.

Now, many of the area merchants are working together to rid the neighborhood of street people. There are signs in the shop windows displaying a begging hand inside the international circle-and-slash symbol. “Do Not Give Money to Panhandlers.” 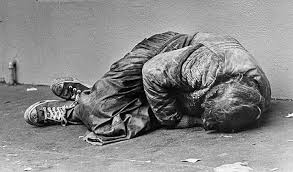 There is even an anti-loitering sign on the front door of the Salvation Army.

The past few months, I have witnessed numerous merchants stepping out of their shops to give tongue-lashings to regulars who live on the wide sidewalks of this newly prosperous neighborhood. There is no large soup kitchen nearby. “Getaway from this door, you! Just move on away from here!”

For all the time I’ve lived here a bus bench has been centrally located, directly across a two-lane street from the bank. The cash machine gets used heavily. The bank window shows a no panhandlers sign. The irony is too thick to be funny. This bus bench has been a place of benign assemblage for five, sometimes up to fifteen people. Most of them wear all the clothes they own. One regular who knows I’ll give, took my quarter, touched my arm and gestured down at his feet. “Got new shoes,” he said. The bus bench has been removed.

The rising hostility here is palpable. It is clear, the business community wants to be rid of its sidewalk squatters.

There has always been a low level of hostility toward the “bums,” but the first time I noticed it had become a concern of commerce was at Christmastime. For the holidays a makeshift Santa’s cottage was erected in front of the recreation center, just steps from the homeless bench. A man dressed as Santa stood in the doorway for hours each day, handing out free candy to good girls and boys. When homeless people approached for candy, Santa denied them.

Mitch Snyder used to go on hunger strikes to get what he was after. He got celebs to drag their rich butts out on the street to feel what it was like. He could fall asleep in seconds lying on concrete. Snyder’s Community for Creative Non-Violence antagonized, for it was filled with people who could be mean and righteous. The SOB Snyder could be the meanest, the most righteous. For all his good-cause crusading many people did not like the man. Snyder used to say, “We’re ready to take a deep breath and let it go – start pounding away at that wall head-first and see what’s hardest, your head or the wall.”

Media attention for the homeless always ebbs during warm months. We got that from Snyder. It’s news when people suffer in the cold, but not news when they go hungry in the sunshine. Still, merchants in my neighborhood are acutely aware of the homeless this summer. That’s how they’ll stay until the scum is swept from the sidewalks.