Of Mice and Mail

WITH THE FIRST coming of cold weather, two things happen at my house. First, like autumn leaves falling through the mail slot and scattering on the floor of the vestibule, brightly colored Christmas catalogs arrive in bunches. I estimate that each day I receive and discard close to 200 tempting pages.

Once, I tried reducing the volume of junk mail by registering my name with a free consumer service. It worked somewhat, for a while, by keeping my name out of the hands of non-profits that did not already have it. But it had no effect on the merchants who were already pelting me with ads for their cosmetics, good living magazines, Anglo-University reference books, signature wreaths of balsam tippers, matted prints of merry mice in your choice of eight pastel colors, including Colonial Blue and Dusty Rose, etc.

This last item brings us to the second thing that happens at my house every year with the coming of cold weather. It’s a tender and troubling subject: mice.

Each year there are one or two. It’s not like I’ve ever felt so overrun as to have the house fumigated with poisonous chemicals. Instead, with the first sign of mice I stash the food out of their reach and eventually they move on.

Mice have come to visit me again this autumn. One early morning I discovered tiny black pellets on the pantry shelves. I was faintly disturbed, the way one is when faced with a small question of ethics. I cleaned up the pellets and dispensed with packages of food bearing the telltale signs of tiny teeth, all the while hoping the hungry critters, like their predecessors, would discover their mother lode had run dry and continue on to the next address. 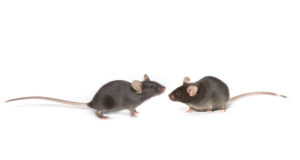 But despite my efforts to starve them away, the mice got cozy in the pantry, so much that late one night they did not even notice as I came sleepily downstairs, turned on the light above the stove, opened the pantry door and stooped to look way inside for some seldom reached for (canned) eatable that might calm my pangs of hunger. The dirt-brown things (ack! three!) were so startled one of them fell from the top shelf, hit the floor and skittered over my bare feet and under the refrigerator. The others made it fast for their hole, their pantry port of entry, wherever that was. I forgot about hunger, hurried upstairs and vowed action in the morning.

It so happened, among the tonnage of junk mail, a catalog caught my eye which was peddling “environment-improving” products. Flipping through the stiff, recycled pages, my eyes landed on “The Better Mouse Trap.” No poisons, no mess, no cruelty. The trap is a rectangular plastic box. The mouse enters an open door, moves to the bait at the back of the box (peanut butter is recommended), thereby shifting the balance of the box and causing the door to shut. The catalog cautions: “If you leave it in the trap for over 18 hours the mouse will die . . . check the trap regularly so you can release the unharmed mouse outdoors.”

I ordered four traps, noting that as a result my name would likely be appearing on several more lists, and awaited their arrival with a clear conscience.

The rodents must have laughed heartily at my new housing developments. Perhaps they danced around the ridiculous yellow boxes, bumping them and springing them shut.

Each time I discovered a sprung trap, how was I to know if a rat was actually inside? Shake the box? If the fragile plastic door opens the rat, which has been kept alive for up to 18 hours eating peanut butter, might pop out, hasten across my fingers and scoot up my arm?

And what was I to do with these vermin once I caught them? Take the traps to a wilderness area for rats (the alley?) and return them to their natural habitat?

One after another, the traps were sprung. I swept them up and threw them in the garbage, not knowing if I was throwing out a tiny living creature or an empty trap. Last night another creepy crawler showed itself in the bottom of the refrigerator.

I’m going to kill them now. I know it’s no big deal. People have killed household pests for centuries. But I had hoped to follow a higher code of conduct. Instead, I’ve bought poison so deadly it could kill much larger and sturdier mammals. I’ve also laid four old-fashioned, spring-loaded, cheese-baited traps, designed to snap the neck of a mouse with a metal bar thick as my forefinger. Add me to the list. I am prepared to become a criminal in the beady eyes of animal life.