What on Earth has happened to radio lately? Is every station today cut from the same corporate conglomerate cookie? Are there no Mom & Pop stations left broadcasting with a commitment to serve the needs of their local communities? You remember them, stations whose eclectic eccentricities were their charms. Have they all been bought up and consulted into centralized sterility? We took to the airwaves in search of such independent stations who still do radio the way that once made us love radio. We had to push past the clear channels and fine-tune our dial carefully. We found three.

Jim Titus, platter-spinner of old, calls his afternoon Big Band show “Sump’n” and you’re as likely to hear Spike Jones as some vintage mid-’30 Dorsey Brothers. He calls his Sunday Swing show “Sump’n Else.” WJEJ is a throwback station with roots that burrow to the infancy of the industry, serving the Cumberland Valley by doing what Radio has always done best, namely, be your friend when you need one.

WJEJ went on the air in the hand-made sound-effects days of 1932, as the fifth station in Maryland. Hagerstown’s original singing morning man was Earl the Early Bird Mentzer with his Smile Club of listeners. During WWII, Hagerstown’s only station with war news was WJEJ. The transmitter and studios were guarded by police against potential sabotage.

In 1972 the station, on the same on the seven-acre plot where it still stands, was bought by longtime radioman John Staub and today with eight full-time staff members he continues WJEJ’s full-service tradition by playing American pop standards, and crossover country, “music that should be heard,” Staub says wryly, alongside local sporting events, retirement-medical-consumer reports, the bi-weekly “Good News Hagerstown,” hosted by a fire department officer. Lou Scally’s “The Phone Party Neighbor of the Day,” offers a swingin’ easy familiar mix. WJEJ does all right in the ratings, fifth in a market of twenty stations. Hagerstown is the nation’s 166th largest market. Staub says, “Anyone can tune into my radio station and not be ashamed of what they hear.” Jim Titus slaps on the headphones and throws open the mike, “Looks like Maisy got out and is not wearing her collar.” Stop everything. Lost Dog Alert! Coming your way from WJEJ.

The “LP” in the call letters does not stand for 33 1/3rpm or “Long Playing.” LP stands for Low Power, as in the recently FCC-designated 100 watts, so weak if the signal hits a building it hasn’t the strength to bounce off but drops into a puddle. WRYR’s streaming capacity is equally low power and stops at thirty. As for long playing, Mike Shay and a hearty gang of volunteers first put the station on the air a mere four years ago. But what WRYR (“We aRe Your Radio.”) lacks in strength and experience, it makes up for in purpose. “We are America’s first environmental radio station!” Shay says with an activist’s vigor. “We’re building a community of communities.” 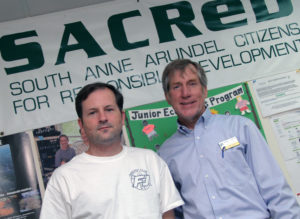 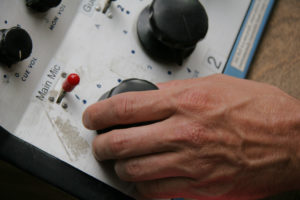 Tom Wisner, Shay’s own Saturday “Inside Track” show charged with “the hot issues of the Chesapeake Bay,” gospel, jazz, all manner of exotic sounds, and public hearings. The annual budget is $8,000. No one gets paid. WRYR’s sunlit studio is in the waterman town of Churchton, above a Domino’s Pizza. Shay says so far NPR has fought off LPs from getting into urban areas, but here along the shores of the Chesapeake grass roots radio grows green and healthy.

Kent County is home to the smallest high school in the state (about 850 students) and to the second most powerful high school radio station in the country. The WKHS transmitters and studios are housed on campus. On-air since the early 1970s, the signal blankets the Eastern Shore and blasts all the way to Baltimore with 17,500 watts – more than a big toy for teenagers. But these teenagers take their radio seriously and operate it as if already competing in the marketplace, which they are, for the WKHS audience measures up admirably with non-coms on the crowded side of the Bay. 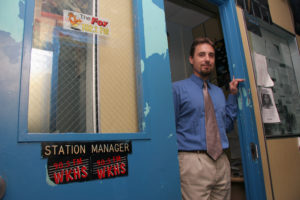 Students run the station during school hours, under the tutelage of station manager Steve Kramarck. The play list is overseen by Kramarck, but students collectively rate the music for suitable airplay – from Billy Joel to Matisyahu, from Mary J. Blige to Blonde.

In the evening, community volunteers take over. Other times, WKHS serves as a relay for a Philadelphia public station. The Board of Education foots the bill for the pro-quality mikes, bare-bones but serviceable audio consoles and editing tools. 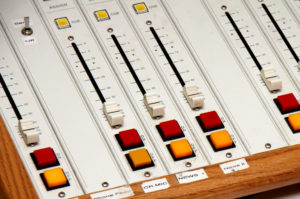 Do WKHS grads get jobs in radio? Yes, many. “I let them know,” says Kramarck, “most of the time pay will start small and they may have to move around from market to market until they find a comfort level. It’s a tough business, but the rewards are great for someone who works hard and perseveres.”