For those of you who love Roman churches, and who doesn’t, here is a extensive index of churches not only in Rome but within Vatican City; “research that has never been done,” says one Vatican Cardinal. The chronology of the churches runs from the 4th century to the 20th century. Twelve years in the making, the index has been created by my friend Ralph “Skip” Conde, with the assistance of a Benedictine monk. Skip is a retired US Navy technical specialist in communications and computers. After military service, he earned a computer and information science degree from the University of Maryland University College, and worked for twenty-five years as a computer professional. What he has done so far on his Roman churches project is nothing sort of amazing, but he admits he has about a half-century of work left. The index is wonderfully rich with photos and facts. Below, also find Skip’s account of his journey through the Eternal City in search of sacred places. Enjoy! DJB 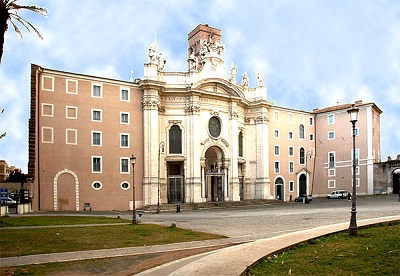 During our visit to Rome in 2006, I became fascinated with the churches there, so I decided to learn what I could about them. When I got home I began researching the churches online. What I discovered is that there are many sites that describe many churches in a general way, and many sites with photographs of the churches, but not in any coherent fashion to be able to understand and appreciate a church. So that became my goal, to photograph and describe each church so that a person could really understand the history and beauty of a church.

My first step was to identify and locate each church. With the help of Google maps and street view I was able to find and locate most of, if not all of the churches in the historical center of Rome, about a 10 square mile area. I only looked for free standing churches, not the chapels in the many palaces there. I counted mainly active, Catholic churches, and some de-consecrated churches.

An interesting factoid, until Rome was secularized in 1870, the only non-Catholic church there was one synagogue.

While searching the web for information on the churches I discovered a really informative site (romanchurches.wikia.com/) that became the basis for my research. It contained a surprising amount of detailed info on all of the churches that I was able to identify. One of the main contributor was a person using the ID Basilwakinsosb. OSB indicates a Benedictine. He lives in a monastery outside of London. During a trip to Europe a few years ago I was able to spend a couple of hours visiting with him at this monastery. We are still in communication. 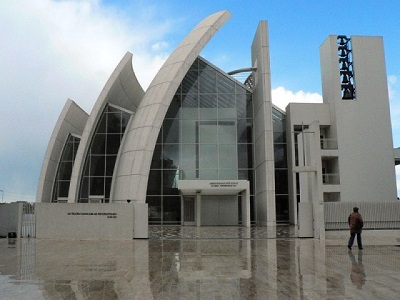 During the process of locating the churches in Rome I made a really interesting discovery. Besides St. Peter’s Basilica and the Sistine Chapel, there are seven other churches in Vatican City. I decided that I would try to get permission to visit those churches. After about six months of emails and letter writing, and some phone calls I determined that there were three authorities that I needed to get permission from. They were the Secretary-General of the Vatican, the Captain of the Swiss Guard, and the President of the Fabbrica de San Pietro, Cardinal Comastri. I was able to get permission from each one, so over a two-year period I visited and photographed all seven of the churches. Most of those churches have no photographic presence on the web. My information is the first and most accurate. I have lately discovered another very small church in Vatican City that I missed before, so I am going to try to get permission to visit that church for my next visit to Rome.

We have been able to visit with Cardinal Comastri three times now, and he and my wife really hit if off. He speaks no English but my wife is Italian, so they carried on great conversations, while I sat there listening. After I completed my research on the Vatican churches and compiled the information and photographs my wife suggested that I put the information into a book to present to the Cardinal, which I did. I formatted the papers and photographs into book format and had two copies bound in leather, one for me and one for the Cardinal. On our next trip to Rome we visited Cardinal Comastri and I presented him with the book. He looked over the book and said to my wife in Italian that research like that had never be done on the churches, and that it might be useful for future research. Then he told my wife that he was going to add the book to the Vatican Secret Archive. When I heard that I about fell out of my chair.

Another interesting thing that I discovered is that a lot of out of copyright books are available on the web in pdf form, so I now have some really interesting books on the churches from the late 19th and early 20th century. Also, I was able to gain access to jstor, an online subscription service that contains many art history monographs. So, using my photographs and all of the other sources that I have, I developed a history and tour of each church, using Dom Basil’s info as a base to work from. But I have been able to correct and expand quite a lot from his information. So the way I present the information and photos is to try to provide a coherent history and description of the churches. I also try to provide a floor plan for each church, and if you notice at the bottom of the main page for each church there is a link for additional information. That brings up a pdf that can be used as a guide for anyone visiting the church.

Most of the photos are my own, but I also borrow photos from the web to supplement mine. I have actually visited and photographed about 85 churches. I spent three days photographing the Basilica of Santa Maria Maggiore, which is one of the most beautiful churches in Rome. In the historical center of Rome there are about 250-300 churches. In the entire area around Rome, about 700. So I have about 50 years of work ahead of me.

By the way, my favorite churches so far are Santa Maria Maggiore; a small, very ancient church about a block from the Basilica named Santa Pudenziana that has a beautiful 4th century apse mosaic; and also the wonderful Mannerist church of Santa Susanna, where we renewed our wedding vows.