STRING QUARTET in G MINOR, Op.Posth. (1815)
Here is a quartet written in respectful and enlightened imitation of Haydn, Mozart, and the young Beethoven. No particular quartet is followed by Schubert (though some listeners hear the influence of Beethoven’s Op.18 No.2), rather the quartets of these three composer expressed the Viennese classical tradition emulated by Schubert. 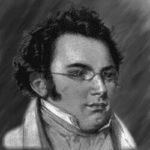 Schubert had a personal tie with great classicists. Haydn had been a teacher of Beethoven and a friend of the Viennese court composer Antonio Salieri, who in turn had provided Beethoven a few lessons and had supervised Schubert’s studies at the Imperial and Royal City College. Although Schubert was gone from the College and working as an assistant schoolmaster, he occasionally went to Salieri for lessons. “He has learnt everything from God, that lad,” said the College’s visiting music master.

Schubert had been a prodigy, but his prodigiousness was not of the freakishly Mozartean sort. At eighteen, he was just at the threshold of great things. Only months before, he had produced his first masterpiece, the song Gretchen am spinnrade. Now, despite his onerous classroom chores, Schubert was rapidly composing his first wave of works which would enter the repertoire, including his Second Symphony, two piano sonatas, two masses, and the present string quartet. Groves calls 1815 the start for Schubert of “an outburst of composition without parallel in the history of music.”

The finely-made String Quartet in G Minor, written in seven spring days, shows scarcely a handful of uniquely Schubertian characteristics. The composer still bore unshakable allegiance to the classical traditions of balance and stability, formal discipline and construction, emotional restraint, and universal (rather than idiosyncratic) language. Schubert never abandoned this allegiance, but his greatness lies in having spoken with his own voice within the august walls of the classical tradition, and in this quartet, especially in the Andantino, there are moments of wondrous lyricism which could have been written by no one other than this timid young man with spectacles, known to his dear friends as Schwammerl, Little Mushroom.