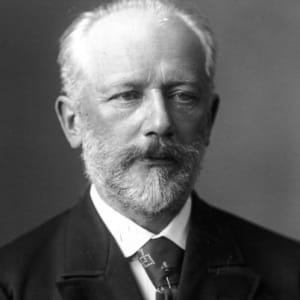 Tchaikovsky did nothing to moderation, loved and hated with the same desperate pale, to where even these words could come from the composer of Swan Lake: “I not only like Mozart, I idolize him. It is my profound conviction that Mozart is the culminating point of musical beauty. I love Mozart as the musical Christ. This comparison does not, to me, seem blasphemous. Mozart was pure as an angel, and his music is rich in divine beauty.”

In one sense, Tchaikovsky was resurrected by Mozart. After six years of travel, and virtually no writing of any significance, Tchaikovsky, at age 47, felt himself used up, emptied out, fearing “that my muse has flown far far away.” Then while on a trip down the Volga River, he summoned up Mozart in hopes of rekindling the flame. This four suite employs two of the Viennese master’s little-known piano works, the motet Ave verum as transcribed by Liszt, and a theme from Gluck’s opera Pelerins de La Mecque on which Mozart wrote ten piano variations. All spring and summer, Tchaikovsky fawned over these small treasures with glorious weepy nostalgia, careful to “modernize” them only so far that the suite might become “the past revisited in a contemporary work.” More than anywhere else, Tchaikovsky was happiest in the past.

The result was this work of sweetness that builds in the final movement (twice as long as the other three movements combined) to a prancing ecstatic set of variations. Tchaikovsky was rejuvenated. He soon concluded his travels and went home to Moscow where the premiere of Mozartiana was greeted enthusiastically. Shortly there came the next of Tchaikovsky’s mind-altering masterworks, Symphony No.5.