DJB comments on “Violence in Israel.”
“In the late summer of 1992, I received a writing fellowship to come to Israel. I was waist-deep in freelancing at the time. It was my only income. I could not very well take off a couple of months without making money, so I arranged with editors at The Baltimore Sun for me to file reports from Israel. Having never been there I had no idea what I could write about. I figured I would find out when I got there. As violence was as prevalent then as it is today, if not greater, the subject of my first report was easy to choose.”

A new friend, recently arrived from Chicago, has turned to me incredulous three times in the past week and asked, “What is this, a war zone?” One can sometimes get that impression in Israel. The amount of quotidian terrorism here far exceeds what is reported in American mainstream media.

No exaggeration, just the facts. During my two-month stay in this tiny country (the size of Maryland) hardly a half-dozen days total have passed without a terrorist incident. I am not speaking of Arab youths throwing rocks at automobiles, which is so common much of it goes unreported even here. And it doesn’t occur only out on the frontier of the occupied, aka liberated, territories.

Every day there is some new awful act. In the small town of Eli a Palestinian man blows himself up attempting to set off a bomb in a public square. In Jerusalem a policeman is killed after he stops a suspicious, and armed, Arab man from approaching a crowded bus stop, where, said the terrorist, he 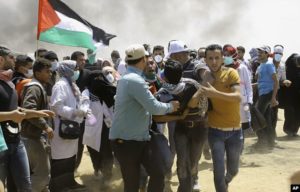 was going to open fire. On the cosmopolitan sidewalks of Tel Aviv an Israeli woman is pulled into a narrow alley by a man who whispers in her ear, “I must kill as many Jews as I can.” He cuts her, not fatally, and flees.

These are just three examples from a long list, a daily list. Cars are shot at from windows of buildings. People are stabbed in taxis. Of course, we can say there is violence everywhere, even (or especially) in our beloved Baltimore. And that’s true. The difference in Israel is not that there is so much more violence, but when, say, an ambulance is fire-bombed in East Jerusalem there are many who applaud the courage of the attackers.

Israelis learn to live with this ever-present shadow of terrorism. Cities and towns, buses and beaches, are flooded with Israeli soldiers, teenagers most of them, each carrying a semi-automatic machine gun slung over his shoulder. (Female soldiers tend not to carry weapons, but it is not uncommon.)

Likewise, the citizenry is armed. I estimate one Israeli man in five carries a hand gun. This goes for not only Zionist settlers whose eyes harden at the very mention of Israel giving one acre of the Golan Heights back to Syria, but men like Avraham Levy here in Ma’alot, a Jewish town of 3,500, where in May 1974 members of the Democratic Front for the Liberation of Palestine carried out the massacre of 25 Israeli hostages, including 22 children at the Netiv Meir Elementary School. Levy runs a small store of stationery and camera supplies. He is father to three girls all under the age of 12. Avraham says he has no argument with the Arabs. He’s for peace, period. But Mr. Levy is no fool. He keeps a pistol in the waistband of his double-knit slacks.

About once a week another skirmish erupts along the Lebanese border as Hezbollah terrorists try to cross the U.N. buffer security zone and get into Israel. The road along the Jordanian border is broom-swept daily so anyone crossing on foot can be tracked down. In Egypt (the only Arab country to have made a separate peace with Israel, however guarded and strained), tourist buses crossing the Sinai Desert to and from Israel are required to travel only by escorted caravan. The caravan of six buses I rode in recently was guarded by 20 well-armed and acutely alert Egyptian soldiers. We stopped frequently so the road ahead could be secured. None of us was allowed to set foot off the bus in the 12 hours it took to reach Cairo.

This is not to paint a paranoid picture of the Land or Milk and Honey, though the U.S. State Department has issued a general warning to Americans traveling in the Middle East because of heightened tensions here. Often, I have been told by smiling Israelis who are perfectly at ease that foreign visitors need not be frightened. Yet the underlying feeling of uneasiness is unavoidable. Israelis may by necessity have learned to live with the shadow of terrorism, but that is far from saying they accept it. It is hard to stress too much how ardently peace is longed for.

For many Israelis with whom I’ve talked, Israel’s “eternal trinity of peace, security and territory,” as expressed by its chief negotiator at the peace talks, Itamar Rabinovich, has been distilled to its single most essential element. Peace is all that matters, and while no one naively believes the peace talks alone will rid the country of terrorist bombings and knife attacks, most everyone agrees that a beginning is necessary and long past due.