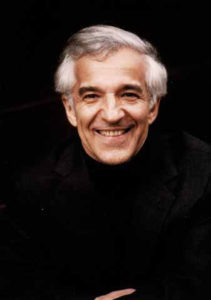 Here is one of my favorite interviews. It took place sometime in the early 2000s, backstage at the Kennedy Center, immediately after Ashkenazy finished leading a rehearsal with the National Symphony Orchestra. The interviewed first aired on WGMS, Washington, D.C. Ashkenazy had long been one of my favorite pianists. His recording of the Schubert G Major Sonata has him playing the first movement in twenty minutes, nearly twice as long as Alfred Brendel’s. It spoke to me as indicative of Ashkenazy’s willingness to play from emotion as much as from intellect. He seems to savor every phrase. Sviatoslav Richter likewise takes his time with the first movement (twenty-six minutes), but drags the emotion out with a strong hand, whereas Ashkenazy coaxes it out with a loving touch. I brought that LP with me for him to sign. I was also then a new devotee of Sibelius, and the combination of Ashkenazy-Sibelius was and is one of those idyllic marriages like Uchida-Mozart or DiMaggio-Yankees or Mustang-Ford. One brings the best out in the other. I was also entirely captivated by Ashkenazy’s deferential charm. A cherished memory.