William Everson –
Drought Poems on a
Rainy Night in L.A.,
by DJB

William Everson’s most enduring legacy may turn out to be his advancement of Robinson Jeffersism, the kind of narrative, solid-man poetry with which he carries metaphoric boulders from the beach up the sheer cliff to place as pieces in his stone tower home. Everson’s verse often has the strength of Jeffers’s, but his ethos is less mythic and more religious. While Jeffers may have inspired or repelled each emerging Beat, Everson was on the front lines of the Beat Movement alongside fire-breathing dragon poets Hydra Rexroth and Norberta Ginsberg. By the time the Beats burned themselves into Brautigan cinders in a bong, Everson was long gone from the North Shore, and if not far gone at least elsewhere in the Golden State out of earshot of the bongos, at Davis, in Santa Cruz. 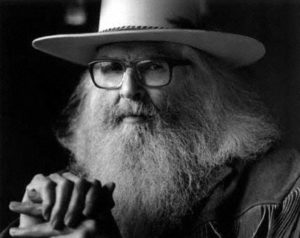 Turn a decade or more of pages, to 1980. Everson is a withered 68 and delivers a reading at California State College, Los Angeles, nestled in the cove where the Long Beach & San Bernardino freeways meet. That rainy night, we met in a sterile state college classroom and talked a while before the reading, then took a short, wet walk across the nondescript campus to a small hall, where a small, strange audience was waiting. I lent my participation to the event by introducing the complex, erotically-charged poet, this shaman of Kingfisher Flat, this white haired seer of miraculous verse. My cassette tape is marked 1-28-80.

What was strange about the audience? After greeting Everson with warm applause, not one person in attendance clapped again until the end of the reading. Everson would take an enormous pause after a poem, and still we remained stone mute, as if slapping our hands together after one of his twisting, harrowing poems would be a vulgarity, wildly out of place, a desecration of this verse’s terrible beauty. So, we sat in silence as Everson leafed through his newest volume, seeking “drought poems.”

William Everson had been living with Parkinson’s for eight years. Now and then during the reading you can hear his shaking hands as he holds onto the podium, and the pop of the microphone as his trembling hand bumps it. Everson appeared in his signature bear claw necklace and famous Lakota buckskin vest.

As for me, today I am appalled by my 26yo self, but compelled never to hide, so, to my embarrassment, here I am. You were never 26, were you?

Bill, as he was known growing up on a fruit farm south of Fresno, the son of Christian Scientists, printers by trade, played on the Selma High football team. He would go on to a stint at Fresno State, not as a footballer but as a budding poet & conscientious objector, a decision which would land Bill at Camp Angel during 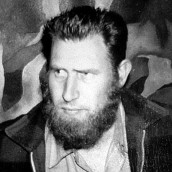 WWII. If you’re not familiar with this quaintly named service camp, it was here, on the coastal edge of Oregon, where the U.S. wartime government put citizens who possessed all of three traits, a sensible survival instinct, the brave conscience to stand up against worldwide insanity, and the arts. At Camp Angel, Everson became a dynamo of organization and artistic output, a man of tremendous, all-consuming physical and intellectual energy. On his rainy night reading at Cal State LA, Everson, even with eight years of PD weighing on his broad, towering frame, Everson looked like a man who once held the sheer power to take on John the Baptist in debate. So strong was his will, Everson became a pillar of the Frisco Renaissance, with other artists he met at Camp Angel. 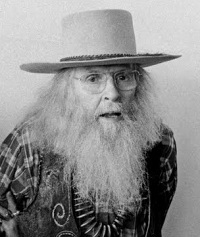 sex to the Psalms, re-writing them into ecstatic poetry for the Devil and God alike. Lucifer would love how Everson smeared the Song of Songs’ lips with his funky literary lather. Jehovah would love how each of Everson’s words was perfect & perfectly placed, as if by the hand of the All Mighty, but in reality only as Everson could do.