This time, it’s a Quiz about how to assuage your parents’ worries. At age nine this Great Composer wrote a letter to his mother which read, “I have written to tell you my worrying secret. Now don’t cry when you read it because it is neither yours nor my fault. I will have to tell it now, without any nonsense. I was not meant to be an athlete. I was meant to be a composer and will be I’m sure. I’ll ask you one more thing. – Don’t ask me to try to forget this unpleasant thing and go play football.” So who was this boy destined to score masterpieces not touchdowns, this Great Composer?

Answer
Time’s up, pencils down! The KUSC Great Composer Quiz. The Great Composer who at age nine, warned his mother he would never be an athlete. His mother, Marguerite McLeod, was a pianist, so you have to think maybe she would welcome the news from her son that he wanted a life in music, but who knows, maybe she had tried to warn him off of it. The answer is Samuel Barber, born in West Chester, Pennsylvania, where the NFL team of choice is the Philadelphia Eagles. A year after writing that letter, ten-year-old Samuel wrote his first opera, The Rose Tree, or tried to anyway, and at twelve Barber won a job as organist at a local church. 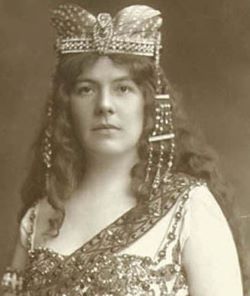 Besides his mother, Barber’s family was rich with musicians, including his mother’s sister, Louise Homer, the international opera contralto who sang on the world’s stage nearly thirty-five years, most of them as a member of the Metropolitan Opera. Homer was among the first singers to record extensively, with Victor Records and Columbia Records, and while she mostly sang Verdi and Wagner, she also created two roles for world premieres: the witch in Engelbert Humperdinck’s Königskinder (The King’s Children, Met Opera, 1910), opposite soprano Geraldine Farrar as the Goose-Girl; and the title character in Mona (Met Opera, 1912) by Horatio Parker, Dean of Music at Yale University. (As an undergrad, Charles Ives studied music theory teacher under Parker.) Mona won the 1911 Metropolitan Opera Composition for best English-language Opera by an American-born Composer.

Another musician in the Barber extended family, and one who had enormous influence on young Samuel, as his mentor, was Louise Homer’s husband, Sidney Homer, composer of American art songs, notably “Casey at the Bat” and “The Banjo Song.”

To read about Samuel Barber’s Quartet in B Minor, “Adagio for Strings” click here.