This time it’s a Quiz about quickly adapting to circumstances. When this Great Composer made his professional performing debut, in Vienna, he was scheduled to play two of his own works, but the second was scratched from the concert at the last minute, too late for the printed program to be changed, because the orchestra didn’t like it. When it came time to perform the scratched work according to the concert program our Great Composer took to the stage himself and improvised on a theme from a popular opera of the day. So who was this man making it up on the fly, this Great Composer? 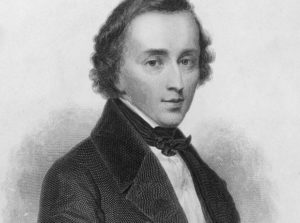 Time’s up, pencils down. The Great Composer who at his professional debut in the Imperial City saw one of his own works removed from the program because the orchestra looked down on it. The answer is Frederic Chopin. On the first half of the program he played his Second Piano Concerto, which also was condescended upon by the Viennese orchestral players; they deigned to play it let it, but after Chopin played the first movement the Concerto was paused so that other works by other composers could be played, then Chopin returned to the stage to play the final two movements. But a set of variations scheduled for the second half was given thumbs down, so in its place Chopin improvised on theme suggested by the audience, from the opera La Dame Blanche by Francois Boieldieu.