This time, it’s a Quiz about following in your father’s footsteps. When she was very young she was discovered to have perfect pitch, by a Great Composer who later became her teacher. Her father, who was seventy-seven years old when she was born, had won a prestigious music award at age twenty. Eighty-four years later, she won the same prize. Later, Asteroid 1181 was named after her. So, who is this perfect shooting star, this Great Composer? 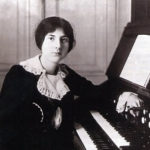 Time’s up, pencils down. The Great Composer whose father, Ernest Boulanger, won the Prix de Rome from the Paris Conservatory in 1835 when he was not quite twenty. He later became a teacher at the Conservatory and married one of his students, a Russian princess, Raissa Myshetskaya. The couple had two daughters, one of whom became the most celebrated teacher of music in the 20th century, Nadia Boulanger. The other daughter, Lili (above), was declared to have perfect pitch by a family friend, Gabriel Fauré. When Lili was nineteen, she won the Prix de Rome for her cantata Faust et Hélène, and thereby became the first woman to win the prize.