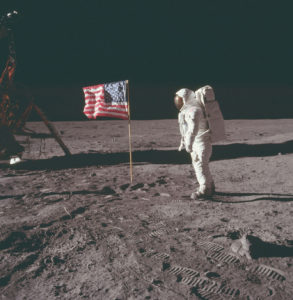 Time’s up, pencils down, a Great Composer Quiz on the 51st anniversary of the Apollo 11 moon landing. By matching the Great Composer with his “moon” work you should arrive at the following answers.

1. Antonín Dvořák D. Song to the Moon, an aria from the next to last of Dvořák’s ten operas Rusalka (1901), sung in the first act by the title character, a water nymph.

2. Benjamin Britten F. Moonlight, the third of four Sea Interludes from Britten’s opera Peter Grimes(1945), which serves as the prelude to Act 3.

3. Leoš Janáček E. The Excursions of Mr. Broucek to the Moon and to the 15th Century (1920), the fifth opera by the Czech master. Meant as a satiric attack on the bourgeoisie, the opera actually gendered sympathy for the Philistine landlord Mr. Beetle.

4. Joseph Haydn C. The World of the Moon, Haydn’s 1777 opera buffa, using a libretto by Carlo Gondoni, the seventh time his libretto had served for an opera since he wrote it in 1750.

5. Peter Ilyich Tchaikovsky B. Lake in the Moonlight, the dance which opens ACT II of Swan Lake (1895).