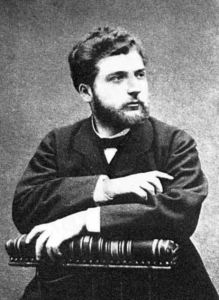 Time’s up, pencils down, the Great Composer whose teacher found little to admire in one of his student’s symphony which was clearly influenced by the professor’s two symphonies. The prof. had it squashed and it languished for seventy years in a vault within the Paris Conservatoire, where this little master-apprentice drama played out. The professor was Charles Gounod, and the student was Georges Bizet, whose Symphony in C was discovered in 1933 by Jean Chantavoine, 66yo musicologist and biographer who served as secretary general for the Conservatoire. Chantavoine revealed his discovery in an article in the periodical Ménestrel. Two years later, Felix Weingartner led the first performance in Basel of Bizet’s Symphony in C.