DJB comments on the Poet

Consider this fanciful statement: If Allen Ginsburg was the brains of the Beat Movement, and Gary Snyder its beauty, Kenneth Rexroth was its brawn. 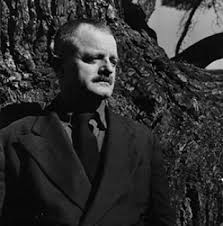 Rexroth was already established in San Francisco literary circles during the 1940s as a “philosophical anarchist” a decade before the emergence in North Beach of the Beats, those writers who, to quote Jack Kerouac, “came of age after World War II [and] supposedly as a result of disillusionment stemming from the Cold War [advocated] mystical detachment and relaxation of social and sexual tension.” By the time Ginsburg, Ferlinghetti, Kerouac, Lucian Carr, Michael McClure and other Beats arrived in the Bay Area (Snyder was a native San Franciscan), Rexroth stood as a pillar of the avant-garde, a writer “well on his way to having read everything. And ‘everything’ is not just the standard European classics in translation: it is the Latins and Greeks in the original; it is the Japanese and Chinese; it is poetry of all kinds; finally, as a sort of spicy sauce over all, it is such curiosities as the literature of alchemy, the writings of 18th and 19th century Anglican divines and the ‘Religio Medici’ of Sir Thomas Browne.” (W. McKaye, Washington Post)

Young bucks beat a path to the City by the Bay. Ginsburg came bearing an introduction from William Carlos Williams, a Rexroth admirer, who wrote in The New York Times, “Rexroth is one of the leading craftsmen of the day. There is in him no compromise with the decayed line of past experience.”

Rexroth helped kick start the Beat Movement by organizing and hosting several poetry and jazz evenings, notably at the Cellar jazz club. He was a key source of networking (he introduced Gary Snyder to Ginsburg) and wrote reviews of Beat poetry. Rexroth co-founded the Poetry Center at San Francisco State College, and was instrumental in establishing the Pacifica Foundation public radio station KDFK, 1949, which proved invaluable in getting the Beats heard. For the famed “first reading” by a group of Beats, October 7, 1955, at Wally Hedrick’s underground Gallery Six, on Fillmore Street, Kenneth Rexroth, whose gravitas was unquestioned, served as master of ceremonies, introducing each of the five poets. 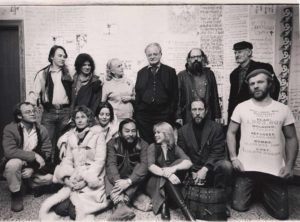 Rexroth’s Beat Adventures cast detrimental shade on his reputation among academics (he called them “corn belt Metaphysicals and country gentlemen”), who dismissed him for his involvement with such showboat radicals. Moreover, the Beat poets themselves, who drew much from their mentor but had nothing to give back, suddenly became famous, which irked the self-taught Rexroth, having earned his status in American Letters the hard way, painstakingly.

Rexroth was in the Beat Movement, but not of it, and after a couple of years he began to distance himself from the hipsters. “I try to keep it loose,” he said. “They have to counter rather than go with me. When they stop I like to be moving.”

I’m hardly tattling on Rexroth by pointing out that some of his “translations” of Chinese and Japanese poetry were in fact original poems he wrote. (Forever the anarchist.) They nonetheless possess the same authentic and transcendent beauty as verse by Fujiwara no Teika or Yosano Akiko, spare yet expansive, whisper-quiet yet audible to the open heart. One such poem became Rexroth’s epitaph on his grave in Santa Barbara, overlooking the Pacific.

As the full moon rises

On the lake of the mind. 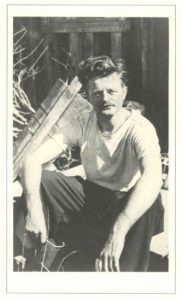 When I met Rexroth he had only sixteen months to live. After four decades in San Francisco he had moved to Santa Barbara, where he lectured for a few years at UCSB. He was accompanied at Cal State L.A. that late-winter evening by his wife Carol Tinker, and he complained several times of discomfort from “my angina.”

Though several books of his poetry & prose have been published since his death in 1982, Rexroth lived to see twenty-nine volumes published. After The Morning Star, which had been out only a few months when he gave this reading, and from which the above poem comes, was followed by two more – Saucy Limericks & Christmas Cheer, and Between Two Wars: Selected Poems Written Before World War II.

Thanks to Poetry Foundation for their kind assistance.