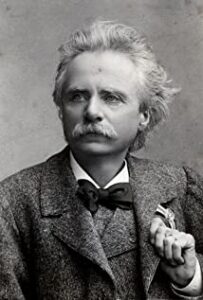 Time’s up, pencils down, the Great Composer whose father Alexander was a merchant and his mother Gesine was a music teacher and daughter of a politician named Edvard Hagerup. His great-grandfather Alexander Grieg settled in Bergen after traveling widely and established several business interests. The answer is Edvard Grieg. His first cousin, twice removed, was Glenn Gould. His mother was a Grieg. See the resemblance?